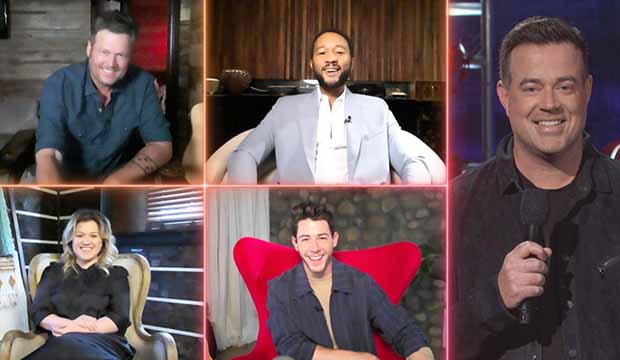 The Top 17 artists performed on “The Voice” live (sort of) on Monday, May 4 (full recap here). And now eight of them will be going home for the results show on Tuesday, creating a Top 9 for next week. Here are the songs that were chosen for the performance show Monday evening for competitors from Team Kelly Clarkson, Team Nick Jonas, Team John Legend and Team Blake Shelton:

Roderick Chambers from Team Nick singing “Lost Without You”

Zan Fiskum from Team Legend singing “Blowin’ in the Wind”

Mike Jerel from Team Legend singing “All My Life”

Mandi Thomas from Team Kelly singing “I Hope You Dance”

Cedrice from Team Kelly singing “Everything I Wanted”

Follow along with our live updating blog below and keep refreshing for the latest recap details:

8:00 p.m. — Tonight the Top 9 will be revealed! It’s the first ever remote elimination and the results from last night’s performances are in. “The Voice” is live and after the first eight artists are voted through by America and saved by the coaches, one more singer will win the instant save. Let’s get started!

8:10 p.m. — The results for Team Blake are up first. The artist who received the most votes and was saved by America is Todd Tilghman! Next, Blake chooses to save Toneisha Harris. Team Blake still has a chance to add another artist in the instant save at the end of tonight’s show.

8:15 p.m. — Team Legend is up next. The artist who received the most votes and was saved by America is CammWess! Next, John chooses to save Zan Fiskum. Will he had another artist by the end of the hour?

8:17 p.m. — Team Kelly is the third group to hear their results. The artist who received the most votes and was saved by America is Micah Iverson! Next, Kelly chooses to save Megan Danielle. There’s still a chance for one of her remaining artists to advance.

8:25 p.m. — Last to learn their fate are the singers from team Nick. The artist who received the most votes and was saved by America is Thunderstorm Artis! Next, Nick chooses to save Allegra Miles. Will there be more? We’ll find out at the conclusion of tonight’s instant save.

8:30 p.m. — It’s time to find out which artists will compete in tonight’s wildcard instant save. From Team Blake will be Joanna Serenko, from Team Legend will be Mandi Castillo, from Team Kelly will be Cedrice and from Team Nick will be Michael Williams.

8:40 p.m. — Joanna from Team Blake is up first singing “Don’t Let Me Be Lonely Tonight.” She’s as smooth as ever as she serenades us with this laid back song, but I’m not sure it will stand out enough to grab the most votes. Next up is Mandi from Team Legend singing “True Colors” and this is a great song choice for her. It’s something everyone knows and she sounds better than ever singing it.

8:50 p.m. — Cedrice from Team Kelly is up now singing “Breathin.'” Cedrice has serious star power when she sings, but this is not a smart song choice. This could hurt her chances. Last up is Michael from Team Nick. I’d say he has the early advantage in the instant save for the simple fact he’s the only male artist competing tonight. He’s singing “To Love Somebody” and has that boy band thing going for him even though this vocal performance is just okay.

8:59 p.m. — The winner of tonight’s instant save is Joanna Serenko! Team Blake pulls out the instant save and earns another teammate in the Top 9. That’s a wrap for tonight!

Predict “The Voice” eliminations for next week! Also be sure to make your predictions for all of our other reality shows, including “American Idol,” “Survivor” and more to influence our racetrack odds. You can keep changing your predictions until new episodes air and compete to win a spot on our leaderboard and a $100 Amazon gift card. See our contest rules and sound off with other fans in our reality TV forum. Read more Gold Derby entertainment news.