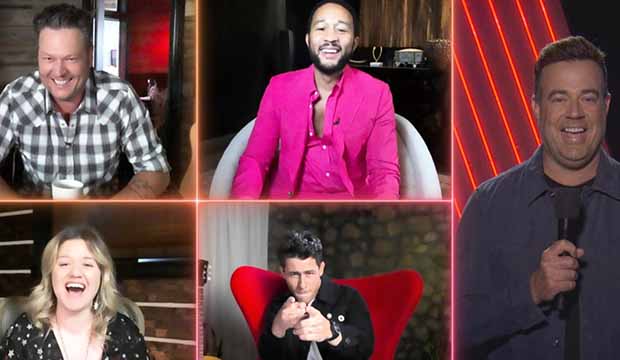 In the lead-up to “The Voice” finale on Monday (May 18), we polled viewers to see who they want to win. Their clear favorite in our Top 5 rankings of the season 18 artists is Thunderstorm Artis, who enjoys a sizeable lead with 37% of the total tally as of this writing. He is being coached by rookie Nick Jonas.

However Artis better watch out for the lone woman in the Top 5, Toneisha Harris, who has polled a full quarter of the vote in our best to worst power rankings. Remember, Harris won the Top 9 Instant Save. That sudden death showdown gave her another chance to impress “The Voice” viewers with her powerhouse vocals on the Minnie Ripperton soul classic “Lovin’ You.”

Harris is coached by six-time champion Blake Shelton as is Todd Tilghman, who has just 13% of the total tally. Sitting in between these two artists on the poll results chart is coach Kelly Clarkson‘s only hope for a fourth win: Micah Iverson with 18%. Rounding out the results is John Legend’s last artist CammWess who registers a mere 7%.

Which of the Top 5 on “The Voice” do you think sounds most like a winner? After reviewing the songs that they have sung so far on season 18 of “The Voice”, vote in our poll as to your choice for champ and we will report back with an update on your rankings. And be sure to sound off in the comments section.

Toneisha Harris (Team Blake Shelton)
Audition Song: “I Want to Know What Love Is”
Battle Song: “”Good as Hell”
Knockout Song: “Diamonds”
Top 17: “Stronger (What Doesn’t Kill You)”
Top 9: “Because You Loved Me”

Micah Iverson (Team Kelly Clarkson)
Audition Song: “All I Want”
Battle Song: “Someone You Loved”
Knockout Song: “Graveyard”
Top 17: “Your Song”
Top 9: “I Will Follow You Into the Dark”