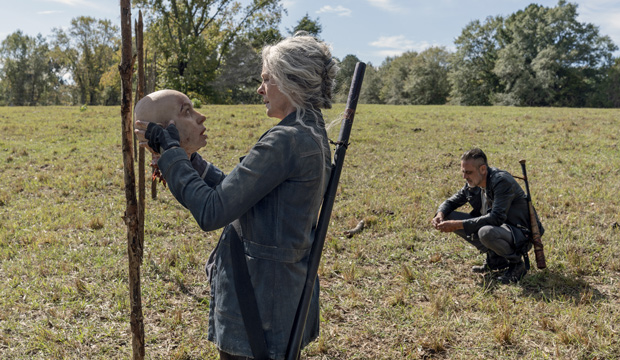 After a brief detour to write Danai Guriria’s Michonne off of the series, episode 14 of “The Walking Dead” returns its gaze to the survivors of the battle at Hilltop. Carol (Melissa McBride) is haunted by ghosts of the past, The Whisperers are in need of a new leader, and one quest leads to the introduction of a fan favorite character from the comics. These are the top five moments from Season 10, Episode 14, titled “Look at the Flowers.”

It’s the flashback fans have been waiting for! Carol speaks with Negan (Jeffrey Dean Morgan) while he stews in his Alexandria cell, shortly after his accidental killing of Lydia’s (Cassady McClicny) attacker. “What if you didn’t have to die?” teases Carol, who is desperate to rid the world of Alpha (Samantha Morton). “You bring me Alpha’s head, that’s what the people will remember you for” she states, “I’ll make sure of it.” Cut to the present day, where Carol completes her revenge by sticking the Whisperer leader’s head atop a spike. “What took you so damn long?” asks Carol. Tears well in her eyes at the thought of the destruction of Hilltop. Negan pleads with her to hold up her end of the bargain and tell Alexandria of his deeds, but Carol isn’t ready to face her friends again and runs off to be alone.

Beta (Ryan Hurst) soon discovers his leader’s severed head. “You’re the Alpha now,” exclaims one of his Whisperers. Angered that anyone would disrespect Alpha, he orders the man to remove his mask. “Just listen,” Beta growls as he grabs the man’s face, “What is she saying?” He forces the man’s ear closer and closer to Alpha’s gnashing teeth until she bites a chunk out of his face. As the pair enter a nearby town, the infected man coughs and sputters, attracting nearby walkers. Beta runs him through with a blade and leaves the man to be devoured in the street.

Beta makes himself comfortable in a bar, one that seems to be familiar to him. He sees a poster for country music star “Half Moon” in concert, which sends him into a rage. It’s pretty obvious that Half Moon is Beta’s pre-apocalypse identity and his time in rehab (where Alpha first found him) led to the emergence of a new brutal personality. Beta eventually calms down and plays one of his old records, drawing swarms of zombies to the bar. He whisperers “thank you. I see now,” to Alpha’s head before finally silencing his master and taking up her mantle. Beta shambles out of the bar, a slice of Alpha’s face replaces the damaged area of his skin mask, and leads his new army of “guardians” towards Alexandria.

Carol sets off in the woods alone, but is haunted by visions of Alpha. “You regret it?” Alpha’s ghost taunts, “people were hurt in the name of your vengeance.” She hisses the names of Carol’s children to remind the mother of the lives she couldn’t save. Alpha claims to know what Carol really wants: to be with them in death. In an attempt to escape this spirit and her actions, Carol tries to wrest a boat free from a small shack, but the ceiling collapses and traps her under some rubble. As a walker creeps near, Alpha goads the beast on and tells Carol to give in: “You know what has to happen. Just look at the flowers like you’re supposed to.” The line recalls her execution of Lizzie, and forces Carol to find the strength to live another day and rejoin her friends. She manages to rip herself free of the rubble and kill the walker. “It’s never too late” she mutters, and Alpha’s ghost vanishes.

Daryl (Norman Reedus) captures Negan when he returns to the cabin to free Lydia. Negan lets Daryl in on his alliance with Carol, but when the pair go back to the spikes, Alpha’s head is already gone. Daryl doesn’t believe that Negan killed Alpha until the pair are ambushed by a group of Whisperers. Because Negan overthrew their leader, they put down their weapons as one says “we kneel to the new Alpha.” Negan happily sinks into his old Savior persona, taking charge of the situation with gusto, and making Daryl kneel to him. With Daryl low, Negan quickly turns the tables and kills the Whisperers, proving to Daryl that he wants to be a helpful member of the community.

The Princess of Pittsburgh

With their home destroyed, Hilltop leaders Ezekiel (Khary Payton) and Yumiko (Eleanor Matsuura) accompany Eugene (Josh McDermitt) on his journey to meet Stephanie and unite with a new group. The King briefly doubts his usefulness on the quest due to his deteriorating health, but Yumiko rouses his spirits. “I’m here to find out what’s possible,” she says, “and we are gonna need the man who built a Kingdom in the apocalypse.”

The trio eventually finds themselves in the strangely empty city of Pittsburgh, Pennsylvania. As they pass through the quiet streets, they spy walkers chained and tied up, acting out “scenes” from normal life. A couple sit for tea in a cafe window, a psychic is ready for palm readings, and a traffic cop is ready to give a ticket to a reckless driver. The later one reduces Ezekiel laughter (the man just lost his horse, so cut him some slack for finding humor in the macabre). Suddenly a voice shouts “Oh my God! HI!” The character, played by Paola Lazaro, isn’t named. But comic fans will recognize her by her big gun and fluffy hot pink sweater. Meet the bubbly and overzealous Juanita Sanchez, Princess of Pittsburgh. Things are about to get weird.