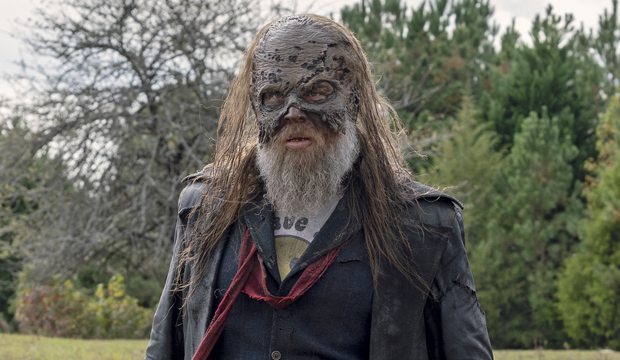 “Where are they?” hisses Beta (Ryan Hurst) at the top of “The Walking Dead’s” temporary season finale. His horde of thousands marches through the open gates of Alexandria to find the community abandoned. Surmising that the survivors fled to Oceanside, Beta begins to move his horde towards the seaside community. But Aaron (Ross Marquand) and Alden (Callan MacAuliffe) follow close behind and radio the group on the Beta’s every move. Explore the top five moments of Season 10, Episode 15, titled “The Tower,” as both sides of the war enact their battle plans.

After her unveiling last episode, Princess (Paola Lazaro) bubbles with excitement at the first living humans she’s seen “in over a year.” She’s so aghast to see anything alive that she even questions if the Hilltop trio are just hallucinations. Princess is a welcome comedic addition to the show, but she quickly grows on Yumiko’s (Eleanor Matsuura) nerves. This is exacerbated when the group spots a couple of walkers. “Look how helpful I can be,” Princess shouts, before unloading a machine gun clip into the undead and scaring away Yumiko’s horses. Eugene (Josh McDermitt) notes that the rendezvous window with Stephanie is shrinking, and Princess promises to help them navigate the city and find a new “set of wheels.” With time ticking, Yumiko reluctantly agrees.

SEE ‘The Walking Dead’ episode 14 recap: Top 5 moments from ‘Look at the Flowers’ include a sinister ghost and a zany new character

Princess leads the trio across a field, but the others take notice that she’s bizarrely counting her steps. She comes to a stop when she spots the severed head of Yumiko’s horse. “Probably stepped on one of the mines,” Princess shrugs. Being lead into a literal minefield is enough to make Yumiko threaten the newcomer with her bow, but Ezekiel (Khary Payton) calms Princess down enough so that she can eventually remember her path through the mines.

After making it through the tense ordeal, the group is horrified to learn that the minefield was the long way to the garage. Princess apologizes profusely, admitting that she was caught up in having fun with other people for the first time in a year and didn’t want to be alone again so quickly. She leads them to the garage, where they discover that their new wheels are in fact bicycles. Eugene shrugs, offering that 15mph is at least better than walking. Yumiko takes pity on the lonely Princess and invites her to accompany them on the journey.

Alexandrians, Hilltopers, and Oceansiders are holed up in a nearby hospital (which is confusingly referred to as a “tower” during the episode). Carol (Melissa McBride) and Kelly (Angel Theory) go on a supply run to fetch some electrical equipment. Carol uses the opportunity to apologize for the cave incident which potentially killed Kelly’s sister. But Kelly says she understands Carol’s actions and is certain that Connie is alive somewhere. Connie reminded Kelly that hearing loss wasn’t a weakness, but a superpower. Now Kelly reminds Carol that the entire community has heard legends of her bravery, and it’s nothing to feel shame over. “You just go off, and do the thing that only you can do,” she says. “Lone wolf. That’s your superpower.”

Daryl (Norman Reedus) discovers Judith (Cailey Fleming) alone in the woods stabbing zombies. “I wanna learn what you do,” she admits, “to keep us safe.” He reluctantly lets her join his perimeter watch, and they spy a Whisperer rounding up walkers. Daryl shoots the woman with a crossbow bolt and gives chase, finding her collapsed in a ditch. During an interrogation, the Whisperer says she fled Beta to make it on her own. “He’s lost it,” she declares, “you took too much.” To Judith’s horror, Daryl executes the Whisperer.

Judith is running on high emotions thanks to last week’s conversation with her mom. She comes clean to Daryl that Michonne (Danai Gurira) is helping out some new friends and not on her way back to Alexandria, though she leaves out the part where Rick is potentially alive. The young Ms. Grimes tearfully explains that she hid the information out of fear that Daryl would leave as well. Daryl admits that he can’t promise anything about the future, but reminds the little one that she has a huge family that would do anything for her. The tender bonding moment is cut short when Gabriel (Seth Gilliam) comes on the walkie: “come back…surrounded.”

The random Whisperer lady was right: Beta is totally losing it. Frustrated at his inability to find the survivors, he starts muttering “show me” over and over again. In his mind, he hears the horde whisper back to him, hissing “Watch. Learn. Have Faith.” He follows these commands and continues marching towards Oceanside. Along the way, one of the cats which live in the hospital hideout crosses Beta’s path. He sees this as some sort of sign (corroborated by full on visions of walkers talking to him) and shifts the horde’s direction towards the hospital. Aaron and Alden, who have been trailing the army, try to radio their group about the incoming hostiles. But their conversation attracts Whisperers, and the pair are surrounded and captured. Beta and his thousands of guardians swarm the hospital, as the villain outstretches his hands and rasps, “faith. Reward!” With the Season 10 finale postponed due to work interruptions related to the current pandemic, audiences are in for an agonizing wait to see what kind of reward is in store for Beta.