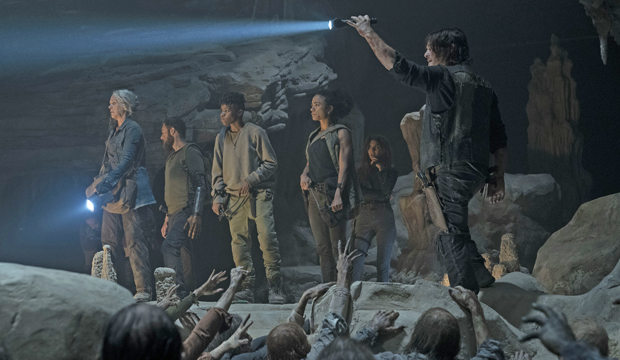 “The Walking Dead” Season 10 went on hiatus after a major cliffhanger left several beloved characters in grave danger. If the months spent away from the apocalyptic series has you scratching your head wondering who survived the twists and turns of this season, fear not! These five events contain every murder and mystery you need to know before “The Walking Dead” returns for its mid-season premiere, “Squeeze,” on Sunday, February 23 on AMC.

The biggest twist of the season was the discovery that Dante (Juan Cavier Cardenas) was a Whisperer spy. The mole successfully infiltrated Alexandria as a doctor and sabotaged the town’s water supply. And just as poor Siddiq (Avi Nash) put together the pieces, Dante overpowers and strangles him to death. Rosita (Christian Serratos) walks in on the crime scene a minute too late, but thankfully beats the hell out of Dante. She also must put down her zombified former lover before he eats her baby. Yikes! In a rare loss of self control, Gabriel (Seth Gilliam) loses his cool and brutally stabs a captive Dante to death. We may not have gotten to know Dante well, but he might set a record for causing the most amount of havoc in the least amount of time.

Negan (Jeffrey Dean Morgan) finally escaped his Alexandria prison and set out on his own. After being forced to confront and murder one of his former Savior zealots, Negan finds himself in the clutches of Beta (Ryan Hurst). The quick tongued survivor convinces the brute to take him to his leader and successfully convinces Alpha (Smantha Morton) to let him join The Whisperers (even though Alpha can’t stand Negan’s constant blabbering). It’s difficult to tell whether Negan is fully committed to skin wearing group or if it is another act. Important to note is that viewers still have no clue who let Negan out of his jail cell. Did Aaron (Ross Marquand) want to pay Negan back for saving his life? Did Carol (Melissa McBride) want to unleash his murderous tendencies on Alpha? It’s plausible that Negan is working as an Alexandria spy.

Eugene (Josh McDermitt) pieced together radio equipment from the fallen Soviet satellite and now has the most powerful signal in the area. While his fellow Hilltop citizens aren’t too interested in his geeky endeavors, Eugene’s experiments with the radio lead to contact with a mysterious woman. The strange voice is not comfortable giving away details on her community, though she lets slip her hometown is Strasburg, Pennsylvania. Eugene lived there too and he excitedly lets his guard down, confessing that he is part of a large community of people.

Some comic book fans are convinced that the woman on the radio resides in The Commonwealth, a massive and highly organized city of survivors from the graphic novels. If the series is ready to introduce that locale, might this be where Maggie (Lauren Cohan) is residing? Or perhaps where the helicopter whisked an injured Rick (Andrew Lincoln) off to for treatment. In any case, it feels safe to assume that this woman is the same one heard in garbled form on the radio at the end of Season 9. Now she is coming through loud and clear thanks to Eugene’s enhancements.

SEE ‘The Walking Dead’ midseason finale recap: Top 5 moments from ‘The World Before’ include fresh faces and new mysteries

Judith captures a man named Virgil (Kevin Carroll) as he attempts to steal from Oceanside. Michonne (Danai Gurira) is paranoid about more Whisperer spies, but Virigil eventually wins her over. He resides with his family on a military base located on Bloodsworth Island (a real life location off the coast of Maryland that also happens to have a perfect name for a setting in a zombie apocalypse). The pair strike a deal: Michonne will let him go and accompany him by boat back to his family. Then she will return with powerful weapons from the military base that the allied communities can use to destroy The Whisperers. With news that Gurira is leaving “The Walking Dead,” one has to wonder if this is how the fan favorite character will be written out of the series. Perhaps she won’t return with the weapons as planned, but instead discover Rick (and join her lover for his spin-off film).

Aaron’s bond with Gamma (Thora Birch) pays off when she gives him the location of Alpha’s horde. But when a group heads to the spot, they discover an empty field…and Alpha sneering at them from a distance. Carol lets her rage get the better of her and gives chase to the woman who murdered her son. She follows Alpha inside a cave system, and her group rushes in after. They all fall victim to Alpha’s trap (literally) and plummet down a hole in the ground, landing deep in a dark cavern. Magna, Connie, Kelly, Jerry, Aaron, and Daryl (Norman Reedus) are stuck in the dark with Alpha’s horde of walkers stashed just below them.