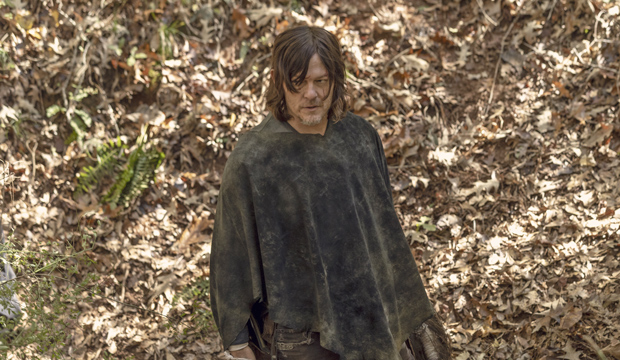 After a Covid-induced delay, viewers finally witnessed the conclusion to The Whisperer War on “The Walking Dead.” Episode 16, “A Certain Doom,” brought an end to Beta (Ryan Hurst) and The Whisperers, but left plenty of dangling threads for fans to ponder. As we look forward to the six newly announced episodes that will be added to Season 10, let’s theorize about the show’s five biggest unanswered questions below.

The Man in the Iron Mask
Fans cheered when Maggie Rhee (Lauren Cohan) made her grand return to the series. She arrived just in time to save Gabriel (Seth Gilliam) from being sliced and diced, but viewers are still scratching their heads over her companion. She had a lieutenant by her side wielding Japanese kama blades, with his face shielded by a metal mask. It’s clear he is an asset to have on your side during a battle, but why the secrecy over this character’s identity? Perhaps it’s a new survivor to the series and they wear a mask to hide some hideous scars or stay incognito. But it’s possible audiences have seen the mystery figure before. This could be the reintroduction of Heath (Corey Hawkins) who went missing several seasons back after getting stuck on a bridge with Tara.

Civil War?
Speaking of Maggie, how on earth will she react when she discovers that Negan (Jeffrey Dean Morgan) is a free man? Just because she spared his life before fleeing to her newfound settlement doesn’t mean she totally forgives him for bashing in her husband’s skull. And though Negan ultimately assassinated Alpha (Samantha Morton), he did so after launching an assault on Hilltop which destroyed Maggie’s former home. The series has already made a point to show that some survivors have immense scorn and distrust for Negan. Will they rally around Maggie in an effort to kill him or at least force him out of the community? Such an action would cause internal strife and conflict within Team Family.

SEE 32 most shocking ‘The Walking Dead’ deaths so far, including Carl, Alpha, Hershel …

Virgil: Virtuous or Villain?
Poor Connie (Lauren Ridloff). She survives a cave explosion, a herd of walkers, and weeks of isolation in the woods only to be found by the craziest man in the apocalypse. Virgil (Kevin Carroll) put Michonne (Danai Gurira) through hell back on Bloodworth Island, so we should be very scared for whatever fate awaits Connie. Hopefully his experience with Michonne has allowed him to turn a new leaf and become a hero, but after so much time spent in solitude, he is bound to have a psychotic break or two. Will Connie have to battle her way out of his clutches or will Virgil be incorporated into the group?

C’mon, Commonwealth!
Eugene (Josh McDermitt) doesn’t get to meet his long distance crush Stephanie at the trainyard, but he and his crew do come face to face with a heavily armed militia. Comic book readers will take one look at the white body armor and recognize these folks as soldiers from The Commonwealth. So much about the show has been remixed at this point, that this upcoming storyline must play out in a vastly different way from the graphic novels. So will these soldiers be led back to Alexandria? Or will the entire show eventually leave Virginia behind for a change of scenery as this new group’s home becomes the main location of the series?

The Search for Rick Grimes
There have been a slew of new announcements for the “The Walking Dead” universe. An additional six episodes are being filmed to expand Season 10, Carol (Melissa McBride) and Daryl (Norman Reedus) will get their own spinoff, and the upcoming Season 11 will be the show’s last installment. With the mother series coming to an end soon, one has to wonder if Rick Grimes (Andrew Lincoln) will find his way back to the series before the conclusion. Lincoln departed the show in favor of shooting three Rick-centered movies. Rick’s on-screen lover Michonne (Danai Gurira) also made her exit last season, and is expected to appear in at least one of the films. But might it be possible that Rick and Michonne will turn up with the arrival of this new militarized group? With the show’s current lead players receiving their own spin-off after the series finale, it might make sense to bring Rick back to close out the show he started.