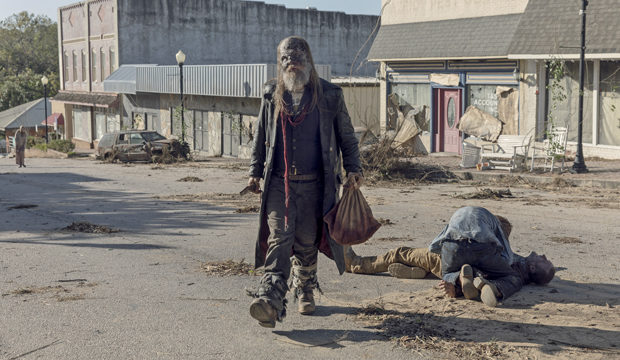 The global coronavirus pandemic delayed “The Walking Dead” Season 10 finale from seeing the light of day, but AMC finally unveiled the action packed episode on Sunday, October 4. Actually, this episode will no longer serve as the finale as it was recently announced Season 10 would be expanded by an additional six episodes. So this installment, “A Certain Doom,” simply serves as the epic conclusion to The Whisperer War.

Beta (Ryan Hurst) has trapped the survivors in a hospital by surrounding them with a horde of thousands of zombies. It’s an impossible scenario for the scrappy team, but as Gabriel (Seth Gilliam) points out: the efforts of the united communities combine to make “a mighty fist.” See the top six moments from “A Certain Doom” below, as “mighty fist” meets walker herd.

Blending In
Gabriel and company’s plan involves leading the walkers away from the hospital by having them follow an old wagon, mounted with a massive stereo system. The undead will follow the wagon until they reach a cliff and launch themselves into the ocean below. Teams of two cover themselves in zombie guts so they can sneak through the horde with stereo equipment and get the wagon moving. It all works well at first, with Diane (Kerry Cahill) sniping hidden Whisperers from the hospital windows. But when Beta tightens his army, she loses sight of the hidden enemies and a Whisperer lunges at Beatrice (Brianna Venskus). The Oceansider downs the villain, but not before getting stabbed and letting out a scream. She yells for Carol (Melissa McBride) to grab her backpack of supplies as she is devoured. Lydia (Cassady McClincy) whisks the pack away and escorts a shaken Carol out of the herd to safety.

“Broken Wagon Axle. Would you like to try and repair it?”
Clearly these folks have never played “The Oregon Trail” computer game, otherwise they’d realize how unreliable wooden wagons are. The pied piper plan works for a while, as the herd clears out of the hospital area in favor of the headbanger music emitting from the wagon (honestly, a huge missed opportunity to have played “Wagon Wheel Watusi” from the seminal hit “Burlesque,” which released the same year as the zombie outbreak). The Whisperers lose patience with the musical interlude and attack the wagon team, using the undead as body shields. One of them tosses a chain tripwire into the road, ripping off a wheel and forcing the team to abandon the wagon entirely.

One of Them
The group quickly changes tactics as the herd moves back towards the hospital. They slink back into the fray and silently assassinate the masked Whisperers hiding among the undead. Beta is furious, especially when he spies Lydia as one of the killers. Before the brute can reach her, Negan (Jeffrey Dean Morgan) blocks his path. Beta tosses a zombie at Negan, who falls to the ground. But before Beta can end his rival, Daryl (Norman Reedus) sinks his dual blades into Beta’s eyes. The Whisperer leader screams and stretches his arms out wide, hallucinating that the zombies start to worship him as a savior. In reality the walkers begin to devour Beta, and he sinks into their deathly embrace with a smile. “Holy shit,” exclaims Negan, “do you know who that asshole was?” Daryl seems to know of Beta’s post-outbreak fame, but replies with “Yeah. Nobody.”

The Widow Returns
Gabriel evacuates the team from the hospital tower as Whisperers break in. The priest stays behind to defend the area, taking out a couple with his shotgun before being overrun. It looks like the baddies might slice him open and toss him down an elevator shaft, reminiscent of the character’s comic book demise. But other figures storm the room in the nick of time to dispose of the baddies. It’s none other than Maggie Rhee (Lauren Cohan), reappearing after reading Carol’s distress letter. We don’t find out about the community she’s been living with, or the identity of her iron masked companion, but it’s a relief to get Cohan back on the series.

Carol’s Choice
Carol has been dealing with the fallout of letting Negan out of jail and his subsequent help in the attack on Hilltop. Lydia sense’s Carol’s outsider status and tries to offer companionship. The duo eventually take it upon themselves to lead the herd to the cliff once the wagon is destroyed. As they approach the drop into the ocean, Carol orders the girl aside noting that it’s “my choice. I’ll finish it.” With zombies at her back, Carol walks right up to the edge and stares hundreds of feet down to the crashing waves. Just as she is about to end her life, what she considers an “atonement” of sorts, Lydia grabs Carol and whisks her behind an outcropping of rocks. The pair hold each other and cry as Lydia tosses her mother’s mask over the precipice, a symbolic end to that abusive life chapter.

Chance Encounters
The episode ends with two meetings that will have fans theorizing like mad. First up is Eugene (Josh McDermitt), who sadly arrives at the railyard too late to meet his radio crush Stephanie. As his group is ready to leave the area, they are blinded by flood lights as armored soldiers storm the area. Is this Stephanie’s group or someone else? The craftsmanship of the armor leads one to believe these people come from a very advanced settlement.

And then there’s poor Connie (Lauren Ridloff). She has somehow survived her ordeal in the cave, but stumbles exhaustedly through the woods before collapsing. Her eyes open briefly as a horse approaches her, and as she lifts her gaze the rider is revealed to be Virgil (Kevin Carroll). This is the same psycho who captured and drugged Michonne (Danai Gurira), so hopefully Connie doesn’t suffer the same fate.