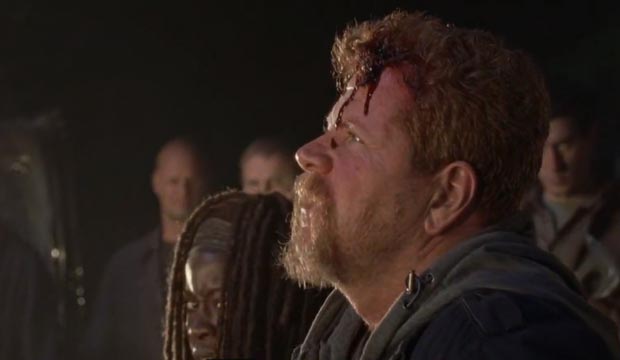 AMC’s zombie apocalypse drama “The Walking Dead,” based on Robert Kirkman’s comic book series, burst onto our television screens in 2010 and has been a ratings juggernaut ever since. Over the past decade the show has experienced both creative highs and unfortunate lows, with some seasons being must-see-TV and others being rather forgettable. Tour our photos above to see all of “The Walking Dead” seasons ranked from worst to best. Does your personal number one choice match ours?

It was great to expand the world of the show by introducing The Kingdom and Oceanside. But the series felt the need to really marinate in the doom and gloom of Glenn (Steven Yeun) and Abraham’s (Michael Cudlitz) murders at the top of the season. Season 7 is largely defined by a sense of helplessness against the threat of The Saviors and it quickly grew tiresome as each episode only presented more of the same. The apocalypse doesn’t have to be this depressing.

Mildly better than Season 7, but still not operating at the series’ best. Carl’s (Chandler Riggs) death was controversial among fans, but at least it was an unexpected deviation from the source material to shake things up and stave off a sense of staleness. Still, Rick sparing Negan (Jeffrey Dean Morgan) worked in the hand drawn world of the graphic novels, but came off as a totally unrealistic move when presented by flesh and blood humans.

Shh! The Whisperers were introduced in the ninth season, but they really take off in Season 10 when the battle between these zombie infiltrators and our human heroes officially begins. Thanks to creep-tastic performances by Samantha Morton (Alpha), Ryan Hurst (Beta) and Thora Birch (Gamma), the Whisperers were brought to life on our TV screens on a weekly basis.

Angela Kang stepped in as showrunner for Season 9 and revitalized the series in a major way. The first half of the season is largely about sending off Rick (Andrew Lincoln). Whisking Rick away in a helicopter might seem like a cop out (AMC has a film trilogy planned for him), but it would still be difficult to find another show that had the balls to write off their central character with such a poignant tribute. The second half of the season confidently moves forward by focusing on the main trio of Daryl, Carol, and Michonne, while also bringing horror back to ‘The Walking Dead’ by introducing the Whisperers with genuinely scary sequences.

SEE ‘The Walking Dead’ episode 10 recap: Top 5 most tense moments from ‘Stalker’ include a deadly presence in Alexandria

Season 6 brings the series to new heights in the excellent first half: Morgan (Lennie James) has his best episode yet with ‘Here’s Not Here’ (shout out to his should-have-been-Emmy-nominated co-star John Carroll Lynch), Deanna becomes the most compelling new cast member thanks to an unforgettable performance by Tovah Feldshuh, and a zombie herd tears apart Alexandria in one of the series’ best set pieces. Unfortunately, the second half of the season loses the momentum, focusing on trying to play fans with fake out deaths (Glenn’s infamous dumpster moment) and incessantly teasing The Saviors only to cut to black before Negan’s infamous kill. The frustrating season finale cliffhanger robbed the gruesome moment of the impact it deserved.

There’s much to love about Season 2. The introduction of Hershel’s (Scott Wilson) farm gave us a slew of compelling new characters to root for. The reveal of a zombified Sophia emerging from Hershel’s barn remains one of the biggest gut punches of series. The walker herd invasion was presented on a scale viewers had not experienced before, and Shane’s (Jon Bernthal) death provided a major twist when he reanimates. But everything in between those moments grinds to a painfully slow halt. The lethargic moments are dominated by the soap opera known as “Who’s Lori’s baby daddy?” Fans shouted: “We don’t care! Back to the zombies!”

Later seasons threw authoritarian psychos at Rick and co left and right, but in Season 3 it was unthinkable that our group might encounter such twisted and dictatorial worldviews. That’s why David Morrissey’s The Governor will always be the series’ best villain. He effectively turned the survivor’s ideas of the world upside down. It’s unfortunate that the writing undermined Laurie Holden’s badass portrayal of Andrea with a misguided romance plot. But in return, this season grants us Michonne (Danai Gurira) as the mysterious new fan-favorite, Daryl’s (Norman Reedus) tragic reunion with brother Merle, and Lori’s jaw dropping death in childbirth. Carl was never the same.

SEE ‘The Walking Dead’ Deaths: 26 Most Shocking of All Time

It’s tempting to throw Season 4 into first place, simply because it features “The Grove.” That episode is one of the finest hours of any TV drama, featuring a gut wrenching performance from Melissa McBride that should have led to an Emmy win. Despite including that high-point, the rest of the back half of this season feels slightly disjointed in its storytelling after the destruction of the prison. That’s a shame since the first half of Season 4 is a tightly wound story battling a deadly infection, capped by the surprise return of The Governor and his execution of Hershel.

“No Sanctuary” is the most epic season opener the series has ever delivered. Watching Carol storm Terminus like she’s the T-800 was a thrill that has yet to be matched. The rest of the season forced the survivors onto the road, and the brutal conditions allowed for nuanced and intimate character moments, including a heartfelt send off for Tyreese (Chad Coleman). Fans were divided on Beth’s arc at Grady hospital, but it gives Emily Kinney more complexities to play than ever before. Season 5 also brought the characters to Alexandria, and watching the resulting culture clash was a fascinating turn for the story.

When “The Walking Dead” first debuted, there was nothing else like it on television. A horror series received the same high quality treatment that prestige dramas were granted on premium channels. The opening episodes are an amazing recreation of the first graphic novel, featuring still-iconic images like Rick riding his horse down a decrepit highway, or Rick and Glenn covering themselves in decaying guts to move through the zombie masses. With only six episodes and  a smaller cast, this first season had a tight mission-based narrative that allowed viewers to instantly care for all of these survivors.