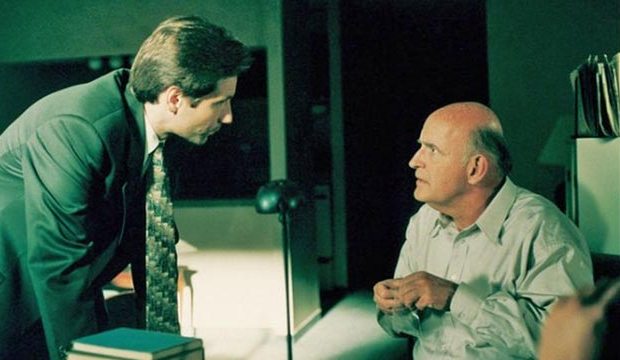 October 13, 2020 marks the 25th anniversary of one of the most iconic “The X-Files” episodes of all time, “Clyde Bruckman’s Final Repose.” Written by Darin Morgan and directed by David Nutter, this darkly humorous episode focuses on guest star Peter Boyle as the titular life insurance salesman who can predict how people will die. It originally aired October 13, 1995 on Fox as the fourth episode of Season 3. (See all Morgan-penned episodes below in our photo gallery.) The episode went on to win two Emmy Awards: Best Drama Guest Actor for Boyle and Best Drama Writing for Morgan.

SEE‘The X-Files’: We rank the Top 10 monsters from worst to best, including Flukeman and Eugene Victor Tooms

In the 45-minute entry, FBI agents Fox Mulder (David Duchovny) and Dana Scully (Gillian Anderson) meet Bruckman during their investigation into a series of murders of fortune tellers and psychics. The lonely man eventually helps them catch the serial killer, but not before telling Mulder he’d die one day by autoerotic asphyxiation and hinting that Scully would never die. The episode ends with Bruckman committing suicide, not being able to live with his depressingly unique ability.

The revelation about Scully’s non-death led to countless theories among “X-Philes” about whether or not she was actually immortal. Season 6’s “Tithonus” essentially confirmed this, as it featured a scene where Scully was dying but photographer Alfred Fellig (Geoffrey Lewis) “stole” her death for himself. Scully later joked about her situation in Season 10’s “Mulder and Scully Meet the Were-Monster” when she told Mulder, “You forget, I’m immortal.”

When “The X-Files” returned in 2016 and 2018, Morgan served as a producer and wrote/directed two instant fan-faves: “Mulder & Scully Meet the Were-Monster” about a lizard man and “The Lost Art of Forehead Sweat” about the Mandela Effect. His quirky style was one of a kind on the show, and he was its only writer to ever take home an Emmy.