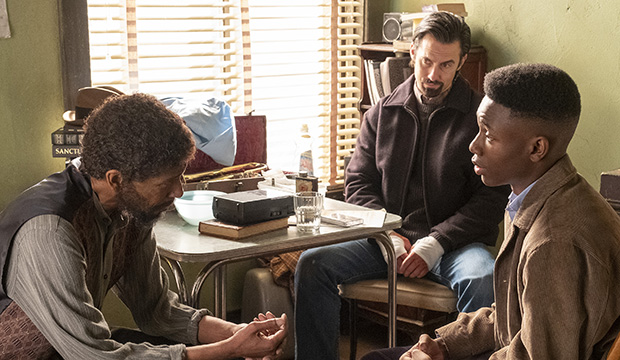 Bradley Whitford (“The Handmaid’s Tale”) prevented Ron Cephas Jones from making history in the Best Drama Guest Actor Emmy category last year, but the “This Is Us” star could still do so this year. Currently in first place in our drama guest actor odds, Jones is seeking his second statuette for the NBC hit, which would make him the first person to win the category twice for the same role.

While the other three guest categories have had repeat champs for the same role — including Mel Brooks for “Mad About You” (1997-99), Kathryn Joosten for “Desperate Housewives” (2005, ’08) and Patricia Clarkson for “Six Feet Under” (2002, ’06) — drama guest actor has yet to double-dip for one character. Voters have awarded the same person multiple times in the category, but they were for different shows and roles: Charles S. Dutton won for “The Practice” in 2002 and “Without a Trace” in 2003, and John Lithgow prevailed for “Amazing Stories” in 1986 and “Dexter” in 2010. You could also count Patrick McGoohan, who won the now-defunct category Best Single Performance by a Supporting Actor in a Comedy or Drama Series in 1975 for his guest appearance on “Columbo.” After the guest categories were established in 1986, he won drama guest actor in 1990 for “Columbo” again — but as a completely different character.

Jones twice returned in Season 4 as Randall’s (Sterling K. Brown) late biological father William, once early in the season in the fall and in the penultimate episode. It’s the latter hour, “After the Fire,” that will likely be his submission. Not only does he have ample screen time, but he gets to make a greater impact and play two different sides of William.

SEE Will ‘This Is Us’ reign supreme as the most nominated cast at the Emmys?

“After the Fire” goes full “Sliding Doors,” having Randall envision what life would’ve been like had Jack (Milo Ventimiglia) survived. In the happy, rose-colored alternate universe, teen Randall (Niles Fitch) meets William, who warmly welcomes him into his life, regales his son with tales of his biological mother and gives him his book of poetry. Later, William gets clean, and Randall helps diagnose his stomach cancer early, preventing his death. But in a bleaker alternate timeline, William coldheartedly rejects his teenage son when he and Jack come to his apartment, brusquely stating that he never had children. He later dies, and Randall trashes his box of belongings, including his book of poetry.

Jones has never been snubbed for his performance as the fan-favorite character. For the first season, he was nominated in drama supporting actor and has made the guest cut the past two years, winning in 2018. And we all know how much the acting branch adores “This Is Us” — 18 of its 27 Emmy nominations and all three of its wins have been for acting: Brown in lead and Gerald McRaney in guest, both in 2017, being the others. Like Jones, McRaney has never missed a bid for “This Is Us.” After not appearing in the third season, he returned in the Season 4 finale and is gunning for his third guest nomination as Dr. K and a chance to make history as well. McRaney, who’s in fifth place in our odds, was blocked from repeating by Jones in 2018.

But Jones’ biggest competition may not be his co-star. Andrew Scott has been rapidly rising in the odds since Netflix confirmed last week he would be entered in guest for “Black Mirror.” In a span of a week, he’s shot from unranked to fourth to third to second. Watch out, Ron.

Rounding out the top six are Jason Bateman (“The Outsider”) in third, Charles Dance (“The Crown”) in fourth and James Cromwell (“Succession”) in sixth.