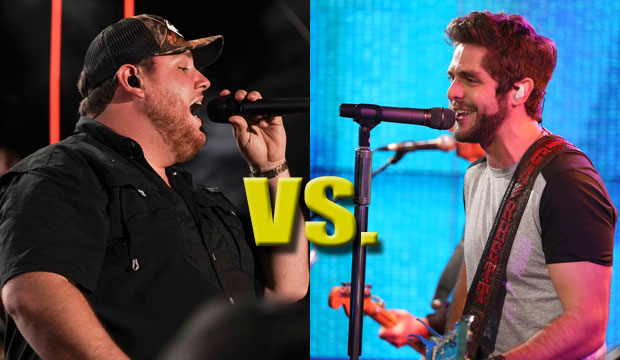 Thomas Rhett won Male Artist of the Year at the Academy of Country Music Awards in 2017 and again in 2019. Now he’s defending his title, and he’s doing it as one of the most nominated artists of the year. So does he have it in the bag? Not necessarily. He’s up against an insurgent Luke Combs, and there’s reason to believe the title could change hands again this year.

Rhett has been nominated for Male Artist of the Year four times in a row, winning it every other year. This year he has the benefit of four other nominations: Album of the Year for “Center Point Road” (doubly nominated as both artist and producer), Video of the Year for “Remember You Young” and his first ever nom for Entertainer of the Year.

But he actually had more nominations than that (six) in 2018 when he lost this award to Chris Stapleton, so sheer number of nominations isn’t an insurmountable advantage. And he’s not the only one in this category who’s also nominated for Entertainer of the Year. So is Combs, who is also up for Album of the Year for “What You See is What You Get,” so he also has strong support from the academy.

And Combs pulled off an upset last fall at the Country Music Association Awards, winning Male Vocalist of the Year against four-time defending champ Stapleton even though Stapleton had an Entertainer of the Year nomination at those kudos and Combs didn’t. So can Combs continue his hot streak and overthrow another incumbent?

According to the combined predictions of Gold Derby users, Rhett has leading odds of 82/25. But Combs is right behind him with odds of 19/5. Our Top 24 Users, who got the highest scores predicting last year’s ACMs, are almost evenly split with 12 of them backing Rhett, 10 predicting Combs and the last 2 going out on a limb for Keith Urban. Who do you agree with?