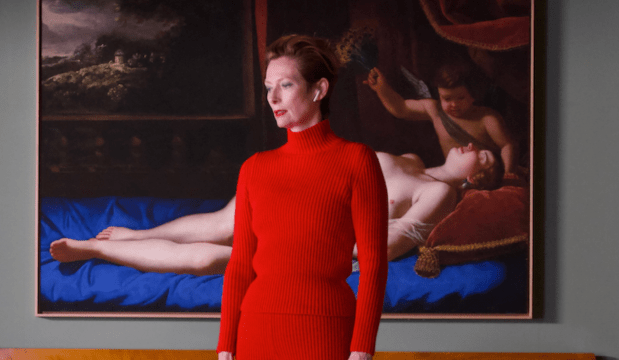 Spain’s master filmmaker Pedro Almodovar’s first English-language film, “The Human Voice,” is akin to a Douglas Sirk fevered-dream. An unnamed woman (Oscar-winner Tilda Swinton) has been waiting for three days for a phone call from her long-time love who has left her for another so he would arrange a time for him to pick up his luggage and his dog. And then the phone rings.  In less than 30 minutes, Swinton emotes every passion from joy to anger to suicidal despair during her photo call.

Critics were effusive in their praise at the Venice International Film Festival and New York Film Festival with Sony Pictures Classic picking up the live-action short film. “Despite its origins as a play. “The Human Voice” is well-suited to being filmed,” said Gary M. Kramer in Salon.  “Swinton’s expressions, from a silent sigh in the opening moments, to her look of shock enhanced by her unkempt, flame-red hair, provide key moments that require a camera to capture in close up. “But Almodóvar also knows when to pull back and give Swinton some breathing room, especially during some of the film’s most dramatic moments.’”

Freely based on Jean Cocteau’s 1930 monologue, Almodóvar has opened up the action with the woman going to a hardware store to buy an axe. Does she want to kill him? Or commit suicide? Shot over a dozen days this past July, Almodóvar also accentuates the theatricality of the piece. Not only does the action take place on the floridly designed set– it recalls one of Republic’s Trucolor process — he also expands the piece to the actual sound stage. And the tall whippet-slender Swinton beautifully fits into Almodóvar’s universe.

“The Human Voice” isn’t the first time Almodóvar has visited the Cocteau classic. His acclaimed 1998 comedy “Women on the Verge of a Nervous Breakdown ”was described by Washington Post’s Rita Kempley as a “glossy delight, it’s as if Doris Day has been brought forward in time and confronted with the consequences of living in sin.’’ Almodóvar muse Carmen Maura, playing a soap opera star and movie dubber who just learned she is pregnant, is waiting for a phone call from her lover who has left her after several years. He didn’t have the decency to tell her in person but to deliver the news on her answering machine and has yet to return any of his calls.

Ironically, it was the anger of actresses which was the genesis of Cocteau writing “The Human Voice” nine decades ago. They had complained to Cocteau, best known for such classic films as 1946’s “Beauty and the Beast” and 1950’s “Orpheus,” that his plays were written to highlight the gift of the directors, not actresses.

The play, which is operatic in its emotion, was turned into an opera of the same name in 1958 by Francis Poulenc. Cocteau not only was involved with Poulenc and soprano Denise Duval on the creation of the opera, he also directed, designed the scenery and costumes for its 1959 premiere.

Swinton, who won the supporting actress Oscar for 2007’s “Michael Clayton,” is the latest acclaimed actresses drawn to “The Human Voice.” Three other Oscar winners and two Oscar nominees have brought this drama to the big and small screen.

Italian actress Anna Magnani, who received the Best Actress Academy Award for her English-language debut in 1955’s “The Rose Tattoo,” collaborated with her frequent director Robert Rossellini (“Rome, Open City) for 1948’s “L’Amore,” which consists of two short films, the controversial “The Miracle” and “The Human Voice.”

Rossellini keeps the action to the confines of the apartment Magnani shared with her lover who has left her to marry another. At first, it’s a bit difficult to see this earthy, spirited actress playing a woman on the brink. But she is glorious as a woman scorned finding solace in disheveled bed listening to the loud sounds of her apartment complex and crying and pleading to keep her ex on the phone for as long as possible. Jay Carr on TCM.com praises how Rossellini uses close-ups to illustrate the character’s pain and anguish. “It’s not the lines she speaks that give Magnani’s performance its life. They’re often banal to the point where you wonder how Magnani is going to make this exercise work. It’s her face in close-up that does the job, whether expressing raw suffering, or achy anxiety when, running her hands over her face while looking in a mirror at unforgiving evidence that she’s alone and getting older.”

SEE Can ‘Nomadland’ follow its Golden Lion grand prize in Venice with a Best Picture Oscar? Recent history bodes well for it

Another Italian legend, Sophia Loren, joined forces with her director son Edoardo Ponti for 2014’s “Human Voice.” Ponti, who dedicates the film to his Oscar-winning mother (“Two Women”), has opened up the film with scenes of Loren walking with her ex-lover-we never see his face-and giving her a loyal maid who doesn’t know Loren’s plight. The actress told the L.A. Times in 2014 that she had long wanted to do “Human Voice.” “It’s the story of an older woman who is really almost at the end of her life,’ noted Loren, who was 80 at the time. “It is a story you can do it when you reach a certain age because it’s about an older woman. I always wanted to do it. When I reached my certain age, I said to my son ‘Why don’t we start working on this; piece’? I think it’s a work of art.”

Swedish icon Ingrid Bergman, who earned three Oscars for 1944’s “Gaslight,” 1956’s “Anastasia” and 1974” “Murder on the Orient Express,” took on the role for TV on ABC’ “Stage ‘67” presentation adapted by Clive Exton from Carl Wildman’s translation and directed by Ted Kotcheff. “To sustain an hour’s long monologue is a challenge to any actress, but Miss Bergman met the test of projecting agony of a woman who is stripped of her central prop in life,” said  the New York Times’ Jack Gould, adding “Miss Bergman’s delicate playing was a tour de force, a brilliant portrait of the woman whose life is wrenched by the fates of her heart. The facial lines of despair were beautifully contrasted with the fleeting moments of eyes made lovely by remembrance of privacies previously shared.’

Norwegian leading lady Liv Ullman, an Oscar nominee for 1972’s “The Emigrants” and 1976’s “Face to Face,” joined the “Human Voice” world in 1979 for New York’s WNET-TV. The New York Times’ John O’Connor proclaimed that this piece needs a bravura turn to make it work “and that is what it gets from Liv Ullmann. Miss Ullmann offers a dazzling display of acting colors. Within a few lines of dialogue, the actress is able to convey warmth and revulsion, strength and vulnerability, hope and desperation. Captured in intense close-up, this is a searing performance.”

Oscar nominee Rosamund Pike (“Gone Girl”) gives another exceptional turn in the 2018 version adapted and directed by Patrick Kennedy. It was something of a family affair for Pike, telling the Oxford International Film Festival in 2018 that she was “obsessed with it” because her mother had done the opera.