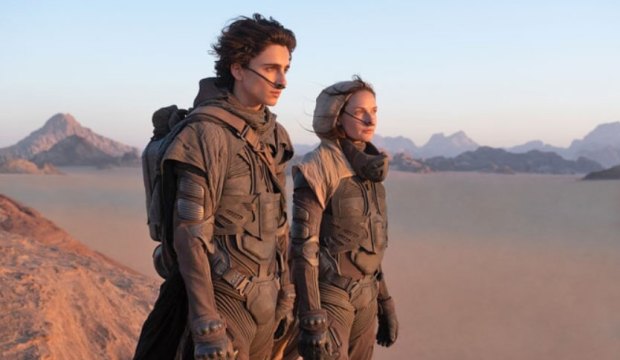 Yes, it is a bit early to speculate on the state of the 2021 Oscar race, especially given that every day that the coronavirus pandemic rages on puts a damper on any indoor movie theaters actually screening films for academy voters as well as regular ticket buyers. Plus the opening dates of some potential blockbusters like Christopher Nolan‘s time-travel film “Tenet” keep shifting according to the surging cases of COVID-19.

It is likely more films may end up as VOD titles or on streaming platforms for now. But with the announcement that the eligibility period will be extended through February so that productions that had to shut down for safety’s sake can be completed, there is still a chance those featuring big name stars will be at least able to be seen before the 93rd Academy Awards ceremony will be held on April 25, 2021.

If we have to watch those titles with awards season hopes on smaller screens, it will help if major stars are involved. Luckily enough, several popular actors who have been nominated for a lead Oscar previously without a win could be in contention this year. As for who among them most deserves a win this year, 37% who took our poll chose Timothee Chalamet. He was previously nominated for his coming-of-age role in the 2017 romantic drama “Call Me by Your Name.” His upcoming film is the sci-fi thriller “Dune,” directed by Denis Villeneuve (“Arrival”).

Coming in second with 19% backing is Benedict Cumberbatch in “The Courier,” a truth-based spy drama set during the Cold War, which premiered at the Sundance Film Festival early this year. Cumberbatch’s lone Best Actor bid was for 2014’s World War II biopic, “The Imitation Game.”

Number three is Matt Damon with 11% hoping he’ll finally claim a lead statuette. He has two chances to grab the gold. He’s an Oklahoma oil rig worker who reunites with his estranged daughter who is charged with a murder she says she didn’t commit in Tom McCarthy‘s “Stillwater.” And he also stars in Ridley Scott‘s “The Last Duel,” a historical drama set in 14th-century France in which he is forced to engage in a sword fight with his best friend who he accuses of raping his wife. Damon has an Oscar for co-writing the script for 1997’s “Good Will Hunting” but failed to win as Best Actor. He also was up for the honor for 2015’s “The Martian,” which was also directed by Scott.

Tied with 9% of the vote each are Michael Keaton and Bill Murray. Keaton stars in Aaron Sorkin‘s “Trial of the Chicago 7,” in the role of Ramsey Clark, the liberal attorney general under LBJ who discouraged indicting the Chicago 7 protesters during the 1969 Democratic National Convention. Keaton’s lone Best Actor bid was for 2014’s “Birdman.” Meanwhile, Murray reunites with filmmaker Sofia Coppola — whose 2003 film “Lost in Translation” is the source of his lone lead Oscar nom as a homesick actor in Tokyo — for the film “On the Rocks” as a gadabout playboy father who reunites with his adult daughter for an adventure in the Big Apple.

Next is Michael Fassbender with 7% as the star of the sports comedy “Next Goal Wins,” directed by Taika Waititi (“Jojo Rabbit”) He plays the coach of the underdog American Samoa national football team. The actor’s sole Best Actor try was for his performance as the co-founder of Apple in director Danny Boyle‘s 2015 biopic “Steve Jobs.”

Then there is Liam Neeson with 5% for”Ordinary Love” as part of a happy long-married couple whose wife struggles after she learns she has breast cancer. The sweet domestic drama is a far cry from Neeson’s Oscar-nominated lead in Steven Spielberg‘s 1993 Best Picture winner “Schindler’s List” as a German businessman who saved the lives of more than 1,000 Jewish refugees during the Holocaust by employing them in his factories.

Last though far from least is George Clooney, with just 2% of the vote. He stars in”The Midnight Sky” as a solitary scientist in the Arctic who tries to save a group of astronauts from landing during a global catastrophe. Clooney, who also directs the Netflix title, won as a supporting actor for the 2005 political thriller “Syriana” and shared in the Best Picture prize for 2012’s “Argo”as a producer, so he isn’t wanting for trophies, though he hasn’t won as a leading man. He has competed for Best Actor for 2007’s “Michael Clayton,” 2009’s “Up in the Air” and 2011’s “The Descendants.” 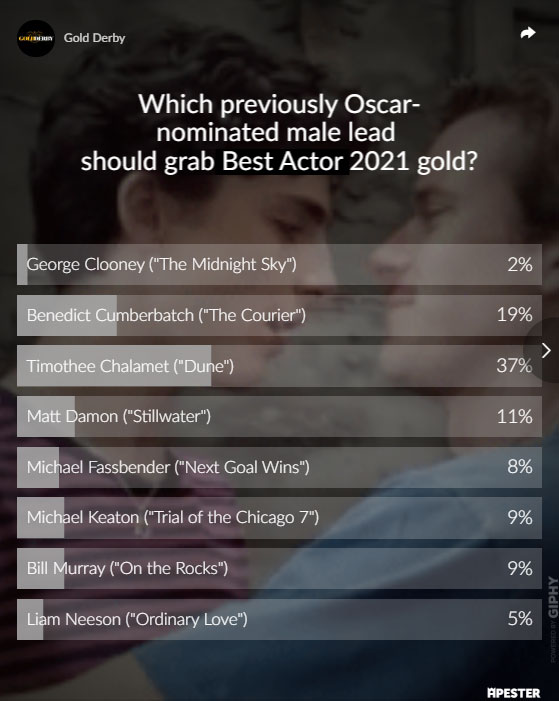