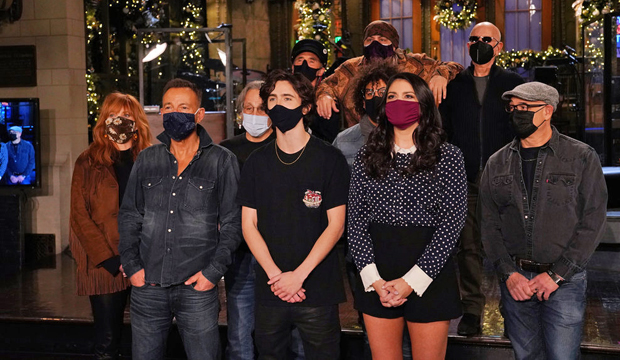 Timothee Chalamet hosted his very first episode of “Saturday Night Live” on December 12. Hosting this week’s episode of the NBC sketch series with musical guest Bruce Springsteen & the E Street Band, the actor would have been promoting his new movie “Dune” had its Dec. 18 release date stayed in place. Alas, the film has been delayed to October of 2021, so Chalamet did not have anything recent to promote.

Chalamet spent much of his opening monologue discussing his life growing up in New York City. To start, Chalamet shouted out his mother, who did background work on “SNL.” He proved this by showing a clip of his mother in the background of a Massive Headwound Harry sketch. “She almost got spit on by Chris Farley,” the actor quipped. Chalamet then moved to a piano where he waxed poetic about spending Christmas in New York City during his youth. The actor humorously recalled, “ice skating on the Hudson,” “sledding down the side of the Chrysler building” and “leaving cookies for Santa in the bathroom at the Port Authority Bus Terminal.” He also noted his first New Year’s Eve kiss was with Mr. Met’s daughter, Stacy Met. “Sweet girl, big head,” he joked.

Chalamet recalled eating Cheetos on the F-train on Christmas Eve. “You eat a handful, then you hold the pole, then you lick your fingers,” he said. “I miss that!” Cast member Pete Davidson then joined him at the piano to talk about his own experience growing up in New York, but in a very different area, Staten Island. Case in point, “Hearing Santa come down the chimney and realizing, ‘It’s just rats.'” Instead of milk and cookies, Davidson would leave him Bud Light and a White Claw. Both agreed they wouldn’t trade New York for the world.

Since his Oscar-nominated role in 2017’s “Call Me by Your Name,” Chalamet has skyrocketed to great success within the film industry, co-starring in such films as “Beautiful Boy,” which earned him numerous accolades, “The King” on Netflix and “Little Women,” which earned a Best Picture nomination. Next year he will star in both “Dune” and Wes Anderson‘s latest film, “The French Dispatch.”