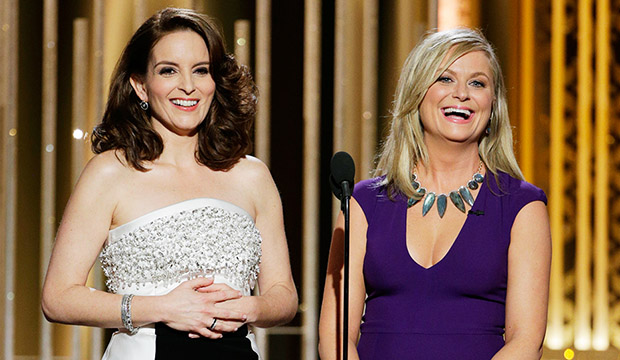 Ricky Gervais‘ fifth time as Golden Globes host will be the last — for now. Because Tina Fey and Amy Poehler will host the 78th Golden Globe Awards in 2021, NBC announced Saturday at the Television Critics Association winter press tour.

Pretending to be NBC Entertainment EVP of Communications Chip Sullivan, Poehler herself shared that she and Fey will return to host for the fourth time next year. “There are no two funnier people anywhere and we are so fortunate that they found time in their busy schedules,” Poehler quipped, adding that she couldn’t wait to award Best Film to “Puppy Dog Bouncing in a Box.”

Fey and Poehler hosted the Globes from 2013-15 and are both Globe winners themselves. Poehler won Best TV Comedy/Musical Actress — an award Fey twice won for “30 Rock” — for “Parks and Recreation” while hosting in 2014.

“NBC has long been the home to two of the funniest people on the planet — Tina Fey and Amy Poehler — and we didn’t want to wait any longer to share the great news that they’ll be hosting the Globes once again,” NBC Entertainment Chairman Paul Telegdy said in a statement.

“There’s no denying that Tina and Amy’s comedic chemistry is infectious,” Lorenzo Soria, president of the Hollywood Foreign Press Association, said. “We can’t wait to see the dynamic duo return to the Golden Globes stage.”

Added Amy Thurlow, president of dick clark productions: “Tina and Amy have provided Golden Globes viewers with some of the most memorable moments the show has ever seen.”

The date for the 2021 Golden Globes will be announced at a later time.

Fey and Poehler have long been in the Peacock business, dating back to their “Saturday Night Live” days. The former is co-creating and executive-producing a new NBC comedy starring Ted Danson and Holly Hunter, and Poehler currently co-hosts “Making It” with her “Parks” cohort Nick Offerman on NBC. The crafting competition series has been renewed for a third season, Poehler also announced Saturday.