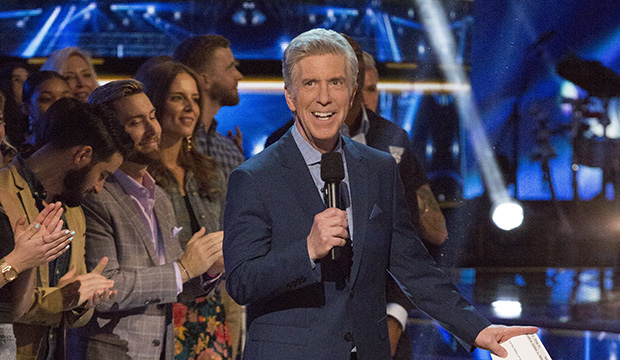 Tom Bergeron spent his hiatus from “Dancing with the Stars” doing “The Masked Singer,” on which he was unmasked as the Taco on Wednesday, and he does want to taco about both shows’ futures.

For the second year in a row, “Dancing” is skipping the spring cycle, and while it’s still awaiting a formal 29th season renewal, it’s expected to return in the fall. Though many fans hope it’ll eventually revert to its old schedule of two seasons per calendar year, Bergeron believes once a year is the correct call for the aging series, which premiered in 2005.

“I think that’s right for now,” he told “Entertainment Weekly.” “We don’t even have a firm pickup for the fall. So I’m clueless as to what the plans are at the network for it. I think they’ve spoken optimistically about it over the past few months, but there’s nothing official yet. But that said, the show is 15 years old. It’s fine to do once a year. And that works so well in England with the mothership, ‘Strictly Come Dancing.'”

Since December, ABC Entertainment President Karey Burke and Rob Mills, the network’s head of alternative series, specials and late-night programming, have both spoken about a 29th season that would air in the fall, with the latter revealing some of the celebrities on producers’ wish list.

“Dancing’s” trajectory over the past two years has been the opposite of that of “The Masked Singer,” which blew up immediately when it premiered last January. A second season bowed in the fall and Season 3 kicked off last month in the coveted post-Super Bowl slot. That means “The Masked Singer” has aired more seasons in the last 12 months than “Dancing” has. Bergeron can see “Dancing”-esque longevity for “The Masked Singer,” but cautions about oversaturation, a common side effect of a reality juggernaut.

“The only concern I would have for them is the same concern I have for any show that becomes wildly popular and then a network tries to squeeze every last drop out of it like what happened with ‘Who Wants to Be a Millionaire’ years ago when Regis Philbin was hosting and in the heyday of ‘Dancing with the Stars’ — I remember there was one season where we were on for three nights in a row,” the host recalled. “My folks were alive then and they said, ‘Honey, we love you. But that’s a lot.’ That’d be my only concern, that they don’t exhaust the format too quickly.”

SEE Tom Bergeron on being ‘The Masked Singer’s’ Taco: ‘This was the most work I’ve done in years!’

The Emmy winner was recruited for “The Masked Singer” by former “Dancing” executive producer Izzie Pick Ashcroft, who had seen an Instagram video of Bergeron’s song on a Mister Rogers tribute album. At the time he joined, there were only two costume options left, taco and jellyfish. “I think she deliberately put the jellyfish in there knowing I would never choose that,” he said. “I would go for the crazier of the two, which was certainly was the taco.”

“The Masked Singer” films on the same soundstage that “Dancing” does, which made it even more “bizarre” for Bergeron, whose final performance wound up being a rendition of The Four Tops‘ “Cant Help Myself.” “So during the period, which was only a few days that I was there, I had a little mask on and a hoodie and a ‘Don’t talk to me’ sweatshirt,” he shared. “I couldn’t acknowledge the people that I usually would hug in the hall. I had to keep walking by them.”

And while fans were quick to ID him as the man underneath the crispy tortilla shell, the judging panel was stumped and none of his old colleagues recognized him either. “There are many ‘Dancing’ alums on the show. Some of the gang was stunned when I took the mask off,” he said. “So we did this lovely group reunion shot with me and my tomato head off.”

To paraphrase Tony Stark, “I am Taco!” @maskedsingerfox