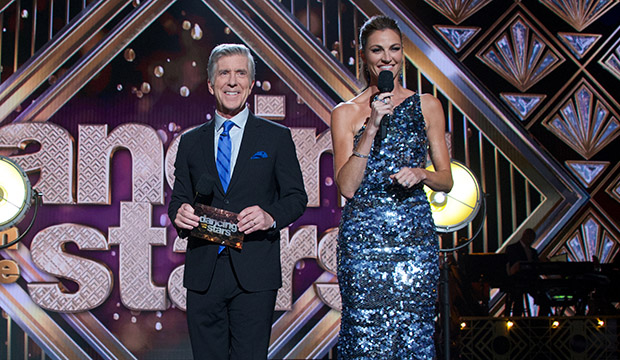 As if 2020 couldn’t get any worse, Tom Bergeron and Erin Andrews are out as hosts of “Dancing with the Stars.”

Bergeron revealed that the long-running series dropped him Monday night on Twitter. “Just informed @DancingABC will be continuing without me,” he wrote. “It’s been an incredible 15-year run and the most unexpected gift of my career. I’m grateful for that and for the lifelong friendships made. That said, now what am I supposed to do with all of these glitter masks?”

Just informed @DancingABC will be continuing without me. It's been an incredible 15 year run and the most unexpected gift of my career. I'm grateful for that and for the lifelong friendships made. That said, now what am I supposed to do with all of these glitter masks?

ABC and BBC Studios, which produces “Dancing,” later confirmed his exit and that of Andrews as well as the show heads in a “new creative decision.”

“Tom Bergeron will forever be part of the ‘Dancing with the Stars’ family. As we embark on a new creative direction, he departs the show with our sincerest thanks and gratitude for his trademark wit and charm that helped make this show a success,” the statement read. “Erin will also not be returning, and we appreciate all that she brought to the ballroom. Fans have been rooting for her since she originally competed as a contestant back in 2010, and her signature sense of humor has become a hallmark of the show.”

“Thank you ABC and the entire ‘Dancing with the Stars’ family for 6 memorable seasons,” Andrews tweeted Tuesday morning. “Those years wouldn’t have been as special without my loving host Tom Bergeron, the talented dancers, and witty judges. I will always cherish my days on that set, even if I wasn’t the best at walking in heels.”

Bergeron has hosted “Dancing” since it premiered in June 2005, spanning 28 seasons. He won an Emmy for Best Reality Host in 2012 and has been nominated nine times, a record he shares with Heidi Klum. He shared hosting duties the first season with Lisa Canning, who was replaced by Samantha Harris for Seasons 2 through 9. Season 7 “Dancing” champ Brooke Burke succeeded Harris for Seasons 10 through 17. Andrews, who finished third on Season 10, has been co-host since Season 18 in 2014.

Last summer, Bergeron spoke out against the show for casting former White House press secretary Sean Spicer, revealing that he had told producers he had hoped “Dancing” would be a “joyful respite from our exhausting political climate and free of divisive bookings from any party affiliations.” “We can agree to disagree, as we do now, but ultimately it’s their call,” he wrote. “I’ll leave it to them to answer any further questions about those decisions.”

Fans, famous and not-at-all famous alike, were immediately outraged at Bergeron’s firing — and with good reason. The “America’s Funniest Home Video” alum is a consummate pro, quick-witted, seemingly has a great rapport with everyone (including Spicer), and makes it all look oh-so effortless, even as things go haywire on the live broadcasts, as they often do. Viewers often proclaim that they’ll stop watching a show when a change they don’t like is afoot, but in this case, we believe them.

So why were Bergeron and Andrews dropped? The official party line is a “new creative direction,” and that’s likely accurate. Season 29 is slated to premiere in the fall, but no one knows what kind of format it will take in the wake of COVID-19. “Dancing” also added new producers last season, who tweaked the judging format, following immense backlash to the 27th season that saw Bobby Bones pull off an upset. This upheaval may just be the next step in their overhaul as they try to rejuvenate the series.

The other aspect simply may be that Bergeron and Andrews, but mostly the former, command too high of a paycheck, given their lengthy tenures, and those tend to go up the longer you’re around. The truth of the matter is that “Dancing” is far from its halcyon days of the late 2000s. Ratings have dwindled (to be fair, so has all of broadcast), the show was chopped down from two nights a week to one in 2013, and went from airing twice a year to once last year (Bergeron said in March that he believes once a year is right for the stage the show is currently at). Aging series get their budgets slashed all the time, so perhaps the show doesn’t see the value in having two hosts anymore, and instead of keeping one, it doubled down on the “new creative direction” and cut them both loose.

Plus, with COVID-19 wreaking havoc, there’s lots of uncertainly about Season 29, so the series may have been having trouble selling ads, which means less money coming in. And if the thinking is to do a virtual season, you could argue that you wouldn’t even need a host for that.

ABC and BBC Studios did not say when a new host would be named.

“Dancing” is slated to return in the fall on Mondays at 8/7c.