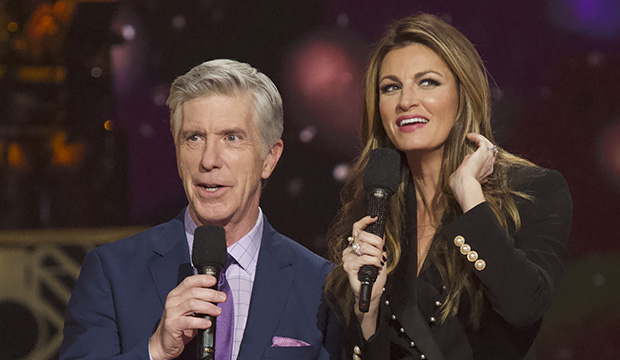 “Dancing with the Stars” wasted no time tapping a new host for the upcoming 29th season. A day after Tom Bergeron and Erin Andrews were axed, ABC announced Tuesday night that Tyra Banks would take over hosting duties. And Bergeron had an appropriately clever response that wouldn’t surprise any longtime viewer.

“I guess I won’t be getting back my monogrammed towels,” the Emmy winner joked on Twitter.

Andrews then quipped, “You got towels @Tom_Bergeron??”

“I’m sorry this is how you had to find out #TerryCloth,” he replied.

I guess I won't be getting back my monogrammed towels 🤔😉

I'm sorry this is how you had to find out 😏 #TerryCloth https://t.co/WLhyDfJAeR

An original host, Bergeron revealed on Twitter Monday evening that the show had dropped him after 15 years. ABC and BBC Studios, which produces “Dancing,” later announced that Andrews, who joined as co-host in 2014 following Brooke Burke‘s departure, was also exiting as the show heads in a “new creative direction.”

“Tom Bergeron will forever be part of the ‘Dancing with the Stars’ family. As we embark on a new creative direction, he departs the show with our sincerest thanks and gratitude for his trademark wit and charm that helped make this show a success,” the statement read. “Erin will also not be returning, and we appreciate all that she brought to the ballroom. Fans have been rooting for her since she originally competed as a contestant back in 2010, and her signature sense of humor has become a hallmark of the show.”

SEE Tyra Banks is your new ‘Dancing with the Stars’ host

Banks, who will also serve as executive producer, teased the revamp on “Good Morning America” on Wednesday. “We’re doing all this crazy stuff, taking it to the next level, but still keeping the stuff that we know America loves,” she said. “But you need to get ready because it’s going to be different.”

“Dancing” is scheduled to air in the fall on Mondays at 8/7c. It’s unclear what format it will take in the wake of COVID-19.