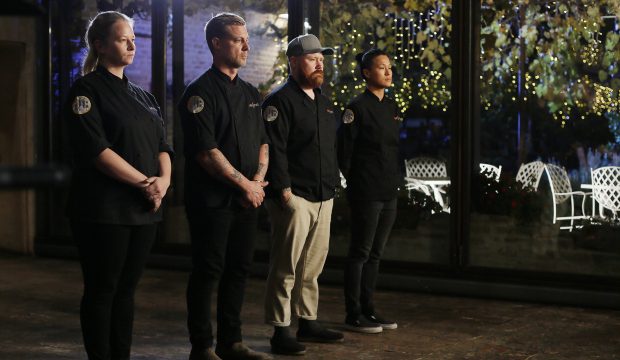 The original “Star Trek” had “The Trouble with Tribbles.” “Top Chef” Season 17 could have called its June 4 episode “The Trouble with Truffles.” Most of the five remaining All-Star competitors struggled somewhat during an elimination challenge that required a dish where the pricey woodland delicacy should have been the star. That the required element was white truffles rather than black was part of the problem since adding other heavy flavor elements in this case overwhelmed their taste.

Here’s the list of sins committed during the challenge, from the least to the worst:

— Melissa King: This San Francisco chef has wisely used her knowledge of traditional Asian dishes and cleverly repurposes them to incorporate what a challenge requires. She had a clear game plan, that she would bridge Asian and Italian while honoring the truffle. She made a Chinese rice porridge called congee and added a quail egg and a few other elements. Her one boo-boo? Adding salami, which took a bit away from the truffle flavor.

— Bryan Voltaggio: I must confess I have had a soft spot for this guy ever since he lost to his younger brother, Michael Voltaggio, on Season 6. The Frederick, Maryland, resident lives only an hour or so away from me. His VOLT restaurant is out of my price range, alas, but I am rooting for him. I find the way he finesses his food with special touches appealing. However, some judging his food — as good as it is –have said he needs to make a bigger statement on the plate. However, his subtle approach to his braised veal shank, aerated potatoes, chestnuts and white truffle, which he was determined to make the main attraction, was perfecto. Italian chef Cristiano Tomei praised his approach. But Melissa took more of a risk with her Asian-Italian hybrid and won the challenge.

— Kevin Gillespie: If you could describe Kevin in one word, I would choose confident. That is what happens when you overcome cancer and return to cooking what you love. His run in “Last Chance Kitchen” was a thing of beauty and he deserved to be back in the game. However, he was tripped up by his choice of packaged meat in the Italian supermarket, noticing after it was too late that it combined pork, wild boar and veal. After spice was added, it ultimately overwhelmed the truffles.

SEEHere’s how to vote for your ‘Top Chef’ Fan Favorite – may the most popular All-Star win!

— Stephanie Cmar: In each episode, I feel for Stephanie. I love her humor and will forever be grateful for her coinage of “Champagne Padma” to describe the show’s host. Unlike the other four competitors who have made the finale on their previous seasons, she failed to do so when she competed on Season 11. However, she’s peaking at the right time and won elimination challenges just when it would count the most. In this episode, she was right not to make some kind of “egg drop soup thing” and instead made fresh pasta as a vessel for the truffles. Her mistake was serving her radicchio puree even though she knew it was overly bitter. Since the description of the dish on her station at the food festival mentioned the puree, she felt obligated to serve it. Here is hoping she learned her lesson.

— Gregory Gourdet: This is a true heartbreaker. The Portland-based chef, who was a runner-up on Season 12, won two quickfire challenges, four elimination challenges including Restaurant Wars and was either safe or had high score almost every other week. But going into the Italy episodes, he had back-to-back low scores — not a good place to be. Despite experiencing back pain, he managed to do fairly well during the quickfire. But he seemed more concerned with doing a dish that represented his approach to food with his boar stew than with showcasing the truffles, which all but disappeared from the simmering concoction.

Since “Lucca,” 37% of Gold Derby readers think Melissa most deserves to win for now. Coming in second is Bryan with 31% backing him. Kevin is next with 22%. And Stephanie is last with 10%. You can still chime in below in the poll and make your pick from the remaining four of who is most worthy of the title of “Top Chef.”