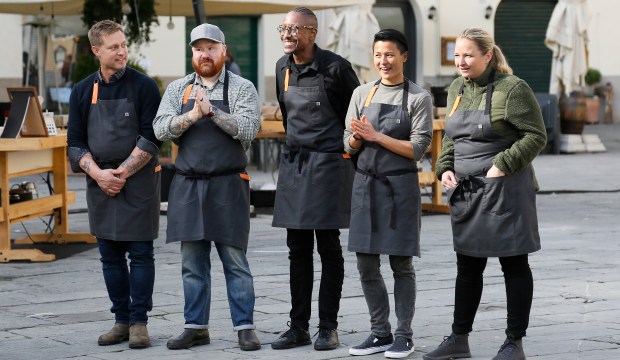 With three more episodes, five remaining competitors and one more chef who will have to pack their knives and go this week, Season 17 of Bravo’s reality staple “Top Chef” has gotten a lot of bang out of its All-Star lineup of former finalists, front-runners and fan favorites assembled in Los Angeles. There have been revered culinary greats as judges such as Nancy Silverton, Jonathan Waxman, Ruth Reichl and Michael McCarty, visits to such local landmarks as the Getty Center, the Walt Disney Concert Hall and the L.A. Coliseum. And given the locale, such stars as Kelly Clarkson, Ali Wong, Danny Trejo and Jon Favreau stopped by as well.

This week, however,”Top Chef” bids farewell to Tinseltown and ventures to Europe for the first time ever for a three-part finale set in Italy. According to the previews, the chefs head to the city of Lucca in Tuscany where they search for white truffles with the aid of some friendly canines. Before we go to Italy, however, it might be a good time to sum up how each of the five remaining chefs have performed on the show thus far.

— Kevin Gillespie: The Atlanta-based chef who originally competed on Season 6 had smooth sailing early in the season, winning three quickfires and three elimination challenges. But his over-ambitious approach to the dreaded Restaurant Wars on episode 8 proved his downfall. However, this fan favorite from his original season, who lost a kidney to cancer, fought his way back in “Last Chance Kitchen,” beating Nini Nguyen, Lee Anne Wong and Karen Akunowicz. Kevin also faced off against three chefs who were still in the game: Brian Malarkey, Bryan Voltaggio and Gregory Gourdet. He had to win two out of three rounds of that challenge to return to the competition and did so, with only Bryan besting him, so don’t count him out.

— Melissa King: This Season 12 fourth-place finisher from San Francisco started strong on “All-Stars” with three wins and three high scores for her dishes early on. But the loss suffered during Restaurant Wars while part of Kevin’s team weighed heavily on her and led her to get three low scores in a row in elimination challenges. Still, she managed to win the last two quickfires and win the most recent elimination challenge before heading to Italy. She is also favored by Gold Derby users in our predictions to win it all.

— Bryan Voltaggio: The Maryland native, whose brother Michael vied against him on Season 6 and won the title of Top Chef, expressed his chagrin this season that he never won an individual quickfire challenge yet. He ranked low twice in elimination challenges and won only once, but scored high or safe otherwise. So he may have to up his game as he heads to Italy.

— Gregory Gourdet: The Portland resident who was a runner-up on Season 12 won two quickfire challenges, four elimination challenges including Restaurant Wars and was either safe or had a high score otherwise. However, he is going into the finale with back-to-back low scores — not a good place to be.

— Stephanie Cmar: A true underdog, the Boston-based private chef from Season 11 was part of the winning team during the season premiere’s open-fire challenge. She managed to also win a quickfire challenge. Then she racked up four low scores and two safe scores before being part of the winning Restaurant Wars team, which seemed to give her a boost of confidence just in the nick of time. She won the Kaiseki challenge with her lemon curd dessert and earned second place in the “Michael’s Santa Monica” elimination challenge. So she could be peaking at exactly the right time.

Take the poll below to vote for the chef you’re rooting for, and make your predictions to tell us who you think will be the likely All-Star to claim the $250,000 prize. And share any thoughts about the All-Star season and don’t forget to vote for fan favorite.