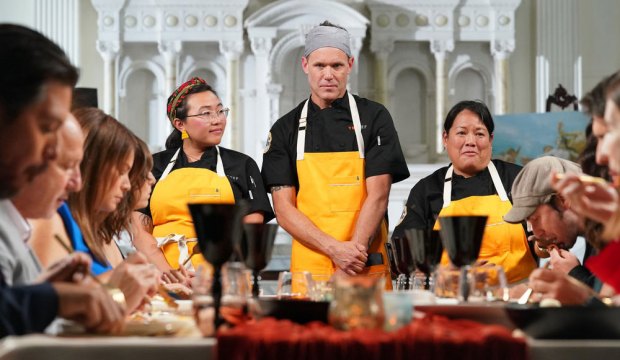 What’s cooking? The Season 17 finale of “Top Chef,” that’s what. The finale arrives this Thursday, June 18, on Bravo as the three competing chefs left standing — Melissa King, Stephanie Cmar and Bryan Voltaggio — each prepare a four-course meal. They will be joined by eliminated chefs Lee Anne Wong, Brian Malarkey and Kevin Gillespie, who will each be paired with one of the three finalists as helpers as the season concludes in Italy –hence the episode title “Finito!”

But since these chefs were all All-Stars who participated on previous seasons but never won, the show seemed to demand more from this crop of 15 contestants. Many of the sometimes brutal elimination challenges that took place in Los Angeles were tied to notable landmarks, award-winning local chefs, scenic locales and popular eateries.

We want to know which challenge was your favorite. Read these summaries of five of the most memorable elimination challenges of Season 17  and take the poll below by picking the one you enjoyed the most among these and eight others featuring during “All-Stars L.A.”:

— Episode 2, “The Jonathan Gold Standard“: In honor of the influential and much-loved Los Angeles Times food critic and Pulitzer winner Jonathan Gold, who died in 2018, the chefs drove around the city and sampled food at small family-run restaurants as well as food trucks that served such ethnic cuisines as Szechuan, Filipino, Indian, Mexican and Ethiopian. All were ranked high on Gold’s list of the 101 best restaurants in L.A. Considering what most restaurants are going through now as Covid-19 still remains a threat, it was a moving if melancholy salute to the varied food opportunities in the city.

— Episode 3, “Strokes of Genius“: The chefs toured the J. Paul Getty Museum, after which the dish they made had to reflect one of four historical art movements: Baroque, Neoclassicism, Renaissance and Rococo. Stephanie made a noteworthy observation when the portraits of nudes with their fleshy curves and bellies inspired her to make tortellini while Melissa, the winner of the challenge, wisely chose to make lobster wonton soup to reflect the opulence of the Rococo period.

— Episode 8, “Restaurant Wars“: This recurring challenge is always a pressure cooker to endure given the many time constraints of doing a pop-up eatery. This season’s version pitted two chefs against one another: Gregory Gourdet with a menu that celebrated his Haitian heritage and Kevin delivering dishes that reflected his Southern roots. Both had won three previous elimination challenges at this point. But while Gregory wisely limited himself to five dishes to serve to the judges, Kevin went overboard with 12. As a result, Gregory won and Kevin stepped up and volunteered to be the one on his team to pack his knives and go. Though he would get back into the game later on by winning “Last Chance Kitchen.”

— Episode 9, “Cabin Fever“: The chefs got out of their quickfire kitchen and headed to the great outdoors on a trip to Pali Mountain Retreat, where they ended up cooking a Sunday brunch buffet for 200 mothers while relying on whatever was available in the camp’s pantry. Bryan caused some of the female diners to go full-on fan-girl over his presence in the buffet line. He also managed to win his one and only challenge this season.

— Episode 10, “Colossal Coliseum Kaiseki“: In honor of the now-postponed Summer Olympics in Tokyo, the chefs prepared a traditional six-course kaiseki meal to several Olympic athletes that required them to treat the ingredients of their courses with respect and let their flavors shine through with perfect prep work. How hard was it? Melissa, who had been on a roll early on, earned her third low score in a row when one of the guest judges found a piece of shell in her crab egg custard.

These are just a few of the highlights of the satisfying moments of “Top Chef” from Season 17. Choose among one of these five challenges or pick another that was most appetizing to you in the poll below. And share whatever thoughts you have about this All-Star edition of the show overall in the comments.