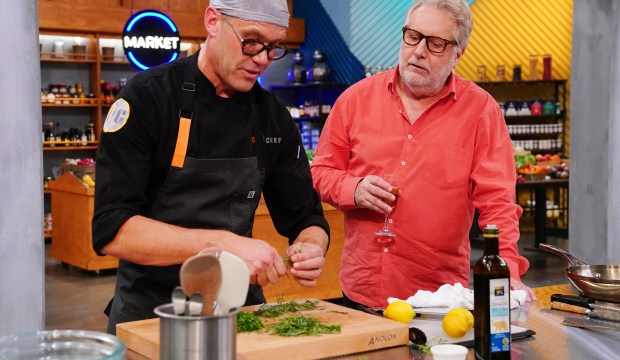 On this week’s episode, Jonathan Waxman, who was once dubbed “an elder statesman of the new California cooking” and previously competed in “Top Chef Masters” in 2010, is a guest judge. Brian is the first to shake his hand in a crowded kitchen at Waxman’s former restaurant Michael’s Santa Monica and says, “A walk back in time, my friend.” Jonathan says, “Forty years ago, but it seemed so much bigger back then. Every time I walk back, it’s small.”

He asks Brian what he is making, and he answers, “Veal, truffles and chanterelle mushrooms.” Jonathan says, “Not so bad.” But then head judge Tom Colicchio spies a bunch of fruit behind him. Brian explains, “I have this fruit and stuff but the fruit isn’t liking the truffles so much. So I’m trying to figure out how to balance the whole dish.” Jonathan simply tells him, “Have fun doing this, Brian.”

They next stop by Stephanie’s work station. She explains, “I got the scallops with spaghetti.” Tom notes that she is doing a twist on Jonathan’s signature dish, which is angel hair pasta with Chardonnay cream sauce. She says that it is “a little nerve-wracking making this dish for him. These are legends and I don’t want to embarrass myself.” She is making agnolotti pasta stuffed with asparagus and seared scallops. Jonathan praises her pasta as “pretty” and tells her, “You actually have the best corner, by the way. This is where Nancy Silverton used to be a cashier.” Stephanie jokes, “No one would trust me with their money.”

Watch the clip below and tune in at 10 p.m. ET/PT May 28 to see how Brian will perform his fruit balancing act.

AJ McLean improved on 'Dancing with the Stars' in week 2, but can he match the success of fellow…

'Dancing with the Stars': Kaitlyn Bristowe wasn't sure she'd be able to perform in week 2, but she…

Skai fall on 'Dancing with the Stars': She tripped up during her samba, but did she really deserve a…

'Dancing with the Stars': Nev Schulman's 'mind-boggling' gyrations (and his chest hair) stole the show…

'Dancing with the Stars': How to vote for your favorite couple on 'DWTS' week 2 of season…

Nope, Tom Bergeron will not rage out against Tyra Banks: 'Nothing against' the new 'Dancing with the…