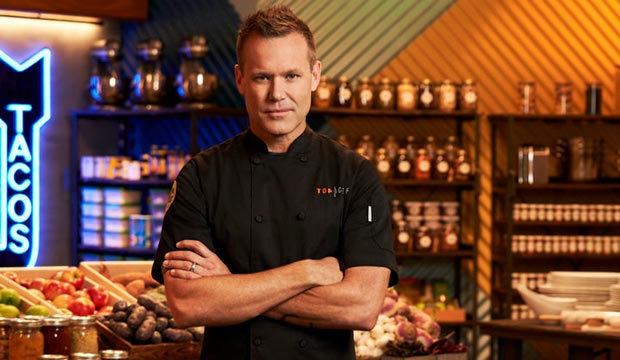 Chef and restaurateur Brian Malarkey, who was a finalist on season 3 of “Top Chef,” apparently thrives on chaos, according to a preview clip of this week’s episode of the elimination challenge. The 14 remaining chefs madly rush into L.A.’s Union Station with just an hour before guests arrive. We witness season 12’s Melissa King taking care of some last-minute chopping chores for her beef tartare.

She notes that Brian is also making beef tartare and admits that she isn’t sure what he is putting on there. “I do know the guy is kind of ADD, he has a lot going on in his head.” We witness Brian taken out fermented egg yolks from a container. “Everything’s coming together,” he says. “Chop up a few things, some herbs. I’m going to be ready right on time.”

“I have to keep it light. I have to have fun. I look down the line, the chefs are struggling so hard” — cut to a clip of season 6 and 8’s Jennifer Carroll, grimacing as she grates lemons

SEE ‘Top Chef’ premiere recap: ‘It’s Like They Never Left’ for the 15 returning All Stars on season 17

Brian concludes: “You don’t want the struggle food. You want the happy food. So come to my station.” Watch the clip below.

Earlier in the second episode of season 17, Jennifer joins fellow chefs season 11’s Stephanie Cmar and Season 1 and 15’s Lee Anne Wong as they chow down on the Indian dishes served at one of the late Los Angeles Times critic Jonathan Gold’s top-rated restaurants, Mayoura.

They are served fish curry, one of the recipes that the eatery is known for, by its owner Dr. Padmini Aniyan. She tells the ladies that Gold “had a huge impact on our business.” Stephanie declares the food “absolutely gorgeous.” Lee Anne observes that “Jonathan helped elevate and made their food important.”