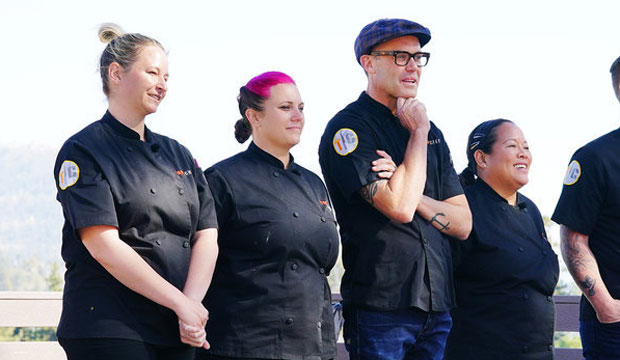 “Restaurant Wars” ended in an upset last week on “Top Chef.” The team led by Gregory Gourdet was full of underdogs who have frequently landed at the bottom with the judges: Lee Anne Wong, Stephanie Cmar and Brian Malarkey. But they nevertheless won that pivotal challenge. But does that mean it’ll be smooth sailing ffor them tonight in episode nine of the cooking competition? Not according to the “Top Chef” fans who have placed their bets here in our predictions center.

As of this writing they’re still the three chefs most likely to be eliminated from the competition. Wong leads with 17/5 odds of packing her knives and going, followed by Cmar with 19/5 odds and Malarkey with 6/1 odds. That’s because you can never rest on your laurels on “Top Chef,” and the judges won’t hesitate to send you home even after winning a challenge. That’s what happened to Kevin Gillespie last week: he won “Pitch Perfect” (the third elimination challenge he won), which meant that he would be the executive chef during “Restaurant Wars,” but the judges gave him the boot after he honorably refused to throw any of his teammates under the bus.

Jennifer Carroll and Nini Nguyen were also eliminated the week after they got high marks from the judges. In fact, the only chef this season who had any bottom dishes before they were eliminated was Eric Adjepong. Meanwhile, Wong and Cmar have been at the bottom four times, and Malarkey has been at the bottom three times. That may be why it has been so hard to anticipate who will be sent home this season: very few of our users saw Gillespie’s elimination coming, or Adjepong’s elimination before that, or Nguyen’s elimination before that. Could that mean we’re in for another surprise?