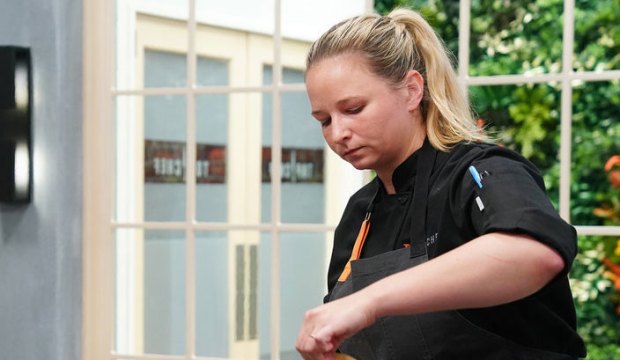 Stephanie Cmar can never catch a break on “Top Chef: All-Stars L.A.” — well, almost never. She has struggled to get out of the bottom during elimination challenges, and going into tonight’s Restaurant Wars she’s the likeliest to be eliminated with 17/5 odds, according to the combined predictions of fans who have placed their bets here in our predictions center. Do you agree?

Cmar started the season strong when she was on the winning team in “It’s Like They Never Left,” but then she plummeted to the bottom in “The Jonathan Gold Standard,” “Strokes of Genius,” “Bring Your Loved One to Work” and last week in “Pitch Perfect.” She was safe in “You’re So Fresh,” but even then she was on the losing team for that vegetarian challenge.

SEE‘Top Chef’: Will the always-dreaded Restaurant Wars have the All-Stars ducking for cover? [WATCH]

She lucked out in “Pitch Perfect.” She won the quickfire challenge, serving a perfect taco to guest Danny Trejo. That won her the last immunity of the season, which meant she couldn’t be sent home in the elimination challenge. And it was lucky she had it. She’s not as experienced as some of her competitors as a restaurateur, so she felt a little out of her depth pitching a dream restaurant idea. The judges weren’t fond of her concept or her schnitzel, and guest judge Kevin Boehm even joked that the restaurant she pitched should have been called Immunity.

But Cmar isn’t the only chef who has had a tough time. Lee Ann Wong has also been at the bottom four times this season so far, and she currently ranks second in our predictions with 4/1 odds of packing her knives and going. Brian Malarkey had a good restaurant pitch, but he and his, shall we say, irrepressible personality rank third with 6/1 odds. So will one of them really be on the chopping block, or will we be surprised like we were last week when Eric Adjepong was ousted?