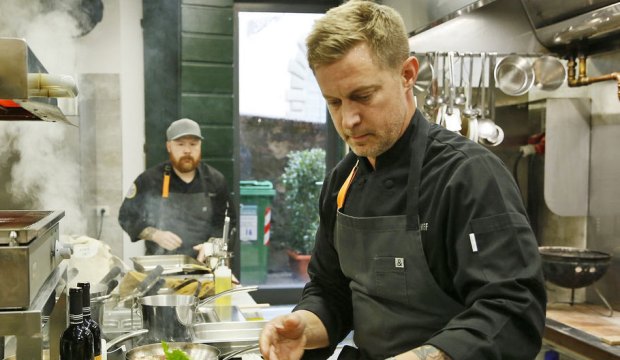 Bryan Voltaggio came into “Top Chef: All-Stars L.A.” as one of the most experienced competitors. He has competed on the show twice before, and finished in second place both times. Now it looks like he’s a dark horse to finally win, but based on the combined predictions of fans who have placed their bets here in our predictions center every week, it looks like he might be doomed to second place yet again.

As of this writing Melissa King is the front-runner to win. She previously competed in season 12 in Boston, where she finished fourth. But she currently gets leading odds of 5/2 this season because she has finally risen back to the top of the weekly challenges after experiencing a lengthy rough patch. After winning three of the first seven elimination challenges she was thrown off her game during “Restaurant Wars,” which was her first of three consecutive weeks at the bottom. But she got back on track by winning “Michael’s Santa Monica,” and then when the remaining chefs flew to Italy she prevailed in the tough truffle challenge in “Lucca.” Counting her three quickfire victories this season, King has won eight times overall this season.

Voltaggio ranks second in our predictions with 4/1 odds despite a hit-and-miss track record. He has had five top dishes so far this season, but he only won one elimination challenge (“Cabin Fever“), and he grew frustrated that he hasn’t managed to win a single quickfire. That’s certainly worrisome with only four chefs left in the competition, and especially after falling short twice before. He was the runner-up in season six of “Top Chef,” losing to his own brother, Michael Voltaggio. Then he came back for the spinoff series “Top Chef Masters” in 2013 and again he was the runner-up, this time to Douglas Keane.

He pointed out in “Lucca” that he has now competed in more “Top Chef” challenges than anyone else in the history of the show. So he’s due for the ultimate recognition. But on this show you’re only as good as your last meal. So he’s gonna have to earn it.