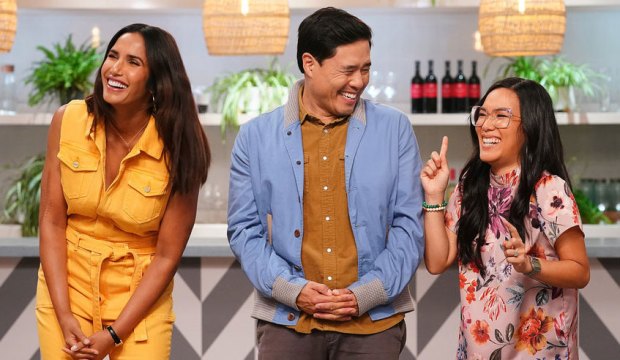 The “Top Chef” contestants are all smiles and break into laughter when they get paid a visit by comedian Ali Wong and her actor buddy Randall Park during the quickfire challenge in a preview clip from the upcoming April 2 episode (see video below). We also join the 13 remaining chefs as they visit the Getty Center in Los Angeles, where they must pick a piece of art and interpret it in food form on a plate.

Stephanie Cmar is drawn to Renaissance portraits of nudes and observes, “Everything has these beautiful curves. The shapes of some of the women’s bodies remind me of tortellini.” With their pale exposed flesh, she isn’t exactly wrong.

Next we get a peek at the elimination challenge as it winds down. Lee Anne Wong says she is “racing the clock” as she rushes to put her dish together. Meanwhile, Brian Malarkey says, “I wish I had the jus on the plate.” Then we hear Los Angeles-based French chef and guest judge Ludo Lefebvre say to some lucky All-Star, “It’s a Michelin star dish for sure. I would put it in my restaurant.”

But next, a disappointed Karen Akunowicz says, “It’s not gonna work. Very brown.” Ludo gripes, “I don’t like it. I don’t know why.” Head judge Tom Colicchio has a clue: “It’s not even sauce, that’s why.” The clip ends with Eric Adjepong and Jamie Lynch both looking stressed. All this makes me stressed.

If the amuse bouche of a preview clip below intrigues you, tune in to Bravo on Thursday at 10 p.m. ET/PT to see if any of the chefs managed to whip up a masterpiece.