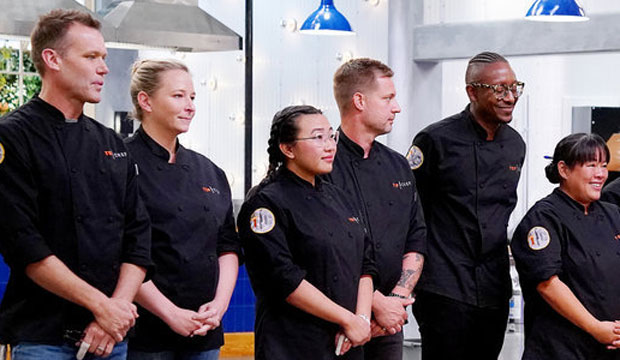 Does Brian Malarkey amuse you with his antics and ingredient overload in his dishes? Did you fall for Gregory Gourdet‘s epic efforts during Restaurant Wars? Did Melissa King‘s dishes make you want to lick your TV screen? Are you hoping that Bryan Voltaggio can join his brother Michael Voltaggio among the ranks of ‘Top Chef” winners?  Or are you pulling for underdog Stephanie Cmar after her triumphant victory during the Kaiseki challenge last week?

Alas, only one person can reign as Top Chef in this highly competitive All-Star Season 17 and win a prize package that includes $250,000. However, you might still want to vote for one of them to win the title of “Top Chef” Fan Favorite this season. The chef who earns the most votes and earns the title will walk away with a $10,000 prize.

Here is how to vote. The first week of voting started on Thursday, May 21, for fans of Bravo’s “Top Chef” to back their fan favorite among the All-Stars competing on Season 17. Each week, up until the finale airs on June 20, those 18 and older who are a permanent resident of one of the 50 U.S. states and the District of Columbia can participate. Cast your vote here. You get 40 votes per week to disperse among multiple choices or place them on just one during each weekly voting period. However, the number of votes you get may change.