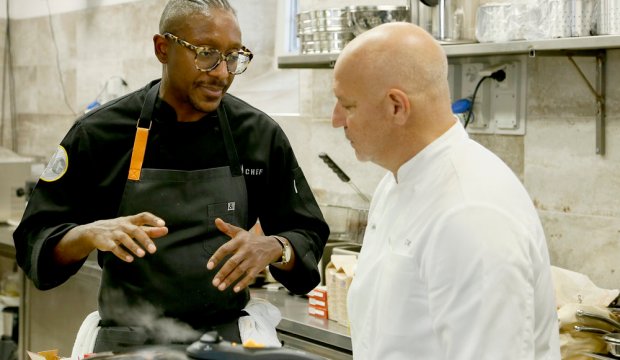 It’s a bit of a surprise that on next week’s penultimate episode of the 17th season of “Top Chef” Gregory Gourdet, who was just eliminated in “Lucca,” wasn’t recruited to be one of the so-called “reinforcements” to assist the final three All-Stars Melissa King, Stephanie Cmar and Bryan Voltaggio with their finale cooking challenge in Italy. Instead, Brian Malarkey — who was eliminated after the final challenge in Los Angeles — showed up as Stephanie’s helper in a preview for the June 18 finale, and Lee Anne Wong is lending Melissa a hand.

Now the truth can be told. When Gregory woke up in his hotel bed on the chefs’ first day in Tuscany, he revealed that the competition took a toll on his back. He observed that the show “takes a lot out of you, and I’m really hoping my back doesn’t bother me through these finals.”

Turns out hope wasn’t enough as he tried to ignore the pain and focus on the challenges in Italy. He managed to make a decent dish for the happy hour quickfire challenge. But he went astray when he mishandled white truffles, the required ingredient in the elimination challenge, after he overwhelmed the expensive delicacy by making a strongly flavored boar stew.

The Portland-based chef who was originally the runner-up on Season 12 revealed on his Instagram account (scroll down for his complete post) that his discomfort was much greater than was shown in the episode that ran on June 4. “There was a lot of drama off camera,” and he has had back issues for more than a decade. “Over the years it came and went, only thing that helped was constant exercise, yoga, acupuncture.”

SEE Sure, it’s called ‘Top Chef,’ but who is your top judge: Tom Colicchio, Padma Lakshmi or Gail Simmons? [POLL]

His back problems began just as he and his fellow finalists were about to fly to Italy for the final three episodes. Hours before they got on the plane he experienced a debilitating spasm that had him limping and pushing through. Gregory adds, “I had another one halfway into the first quickfire in Lucca two days later.” For the next 24 hours, he met with medics, doctors and chiropractors who gave him shots, adjustments and pain medication. He could barely walk during the truffle hunt and the shopping at the grocery store.

Gregory chose to make the boar stew since he knew he could make it in his health condition. But although the judges liked the steamy, spicy stew, it simply overwhelmed the truffles. After being cut he was in bed for three days without being able to move before he finally flew home.

He actually did quite well in the early goings of the season, winning two quickfires and four elimination challenges. But in the last two episodes before the show left L.A., he earned low scores. Gregory, however, was happy he could celebrate his Haitian heritage with the dishes he made — especially since he featured the island country’s cuisine for his win during Restaurant Wars. Here is hoping he gets another chance to appear on another season or at least be a guest judge.

Feeling tender after this weeks @bravotopchef elimination but the Leaning Tower of Pisa has my back. . This is the tea on what happened, there was a lot of drama off camera. . 10 years ago I had my first back issue, threw it in the walk in and had to stay in bed for a day. Over the years it came and went, only thing that helped was constant exercise, yoga, acupuncture. Hours before we got on the plane for the Top Chef finals in Italy I had a debilitating spasm that had me limping and pushing through. I had another one halfway into the first quickfire in Lucca two days later. The next 24 hours was a rotation of medics, doctors and chiropractors giving me shots in my butt, adjustments and pain meds so I could just make it through the truffle challenge. I could barely walk during the truffle hunt and the grocery shop. I chose to make the dish I did because I knew I could make it injured. I crossed my fingers it would work but alas it was the wrong dish for the challenge and not executed great. As you saw there are serious rules with how to respectfully use this cherished ingredient. I blew it by blowing out the delicate white truffle. 😐 I was then in bed for 3 days after my elimination unable to move then finally flew home. . A huge thank you to everyone that tuned in and rooted for me. I only hope I was able to bring you an hour of entertainment during these historic times. Things in society have gotten far more serious so this is a perfect time to transition into focusing on more critical things. . This year we have a Top Chef Fan Favorite contest and if I win I will donate the entire $10,000 to food banks in Louisville, Minneapolis and Brunswick, GA to support the communities of the recently slain. I need your vote to make that happen! We have two rounds left to get through. Link in Bio to vote! 🙏🏾 . Top Chef fam, thank you for everything! 🙏🏾 I made some mistakes, one sent me home before the finale but I can honestly say I gave 100% each day, got to show America Haitian food. I have zero regrets. 👍🏾🇭🇹✨ . Remember everything you need in life is already inside of you. Please keep up the fight everyone. ✊🏾 Much love. – GG

Be sure to make your predictions so that the contestants can see how they’re faring in our racetrack odds. You can keep changing your predictions until just before the next episode airs every Thursday on Bravo. You’ll compete to win a spot on our leaderboard and eternal bragging rights. See our contest rules and sound off with other fans in our reality TV forum. Read more Gold Derby entertainment news