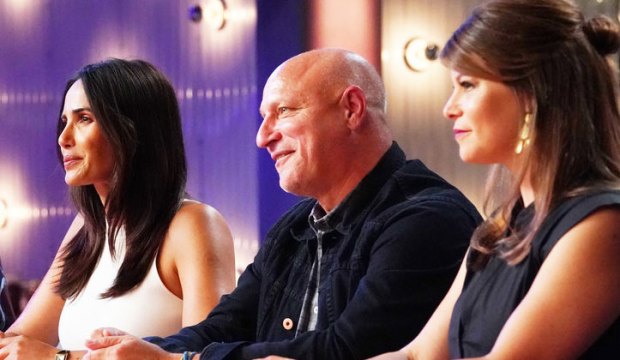 There is a reason why the Emmy-winning reality cooking competition series “Top Chef” has been a staple in Bravo’s TV pantry since it premiered March 8, 2006. That’s primarily because everyone eats. And while some of the chefs each season lack the skill set to handle cooking with a time limit and required ingredients, the results of each challenge usually result in yummy food porn — calorie-free for those of us enjoying it through our screens. Now that the finale is about to take place this Thursday at 10 p.m. ET/PT, it is a good time to toast the trio of judges on the show.

If anyone is the face of the show, it is celebrity chef Tom Colicchio, who has been the head judge since the series began. While the Food Network has “Chopped,” “Iron Chef America” and “Guy’s Grocery Games,” they are edited to feel more like game shows while “Top Chef” rewards those who can think on their feet in the kitchen and put out great dishes under duress. Sure, some of the themes of the challenges can be corny, especially quickfires. But given that Season 17 has been devoted to 15 All-Star chefs who competed on past seasons but never won, the stakes this time have been even higher than usual.

Besides his appearances on the show, Colicchio is the owner of five restaurants in New York and Los Angeles and a participant of two others in Las Vegas that, unfortunately, are now closed because of the COVID-19 pandemic. A longtime activist when it comes to the food chain and hunger issues, Tom helped form the Independent Restaurant Coalition to lobby Congress to help out the restaurant industry. He was also an executive producer of the 2013 documentary “A Place at the Table,” which was directed by his wife Lori Silverbush.

That may be why 54% of viewers of the show chose Tom as their favorite judge. Padma Lakshmi, who earned 26% of the vote, has been part of the show since its second season. She knows her stuff as a cookbook author and adds some glam spice to the proceedings with both her no-nonsense pointed critiques and her overall sense of style. She also gets to deliver the final blow to the eliminated chef each week by telling them, “Please pack your knives and go.” Meanwhile, Canadian food writer Gail Simmons, who received a backing of 20%, is more like the chef next door who often manages to smile even after tasting an underwhelming dish.

While the two female judges would be missed if for any reason they had to leave the show, I don’t think “Top Chef” would survive without Tom’s integrity and common-sense approach to cooking. It took some guts for him to do an after-show this season titled “What Would Tom Do?” as he demonstrated how he would have handled the main challenge of an episode and shared those recipes online. 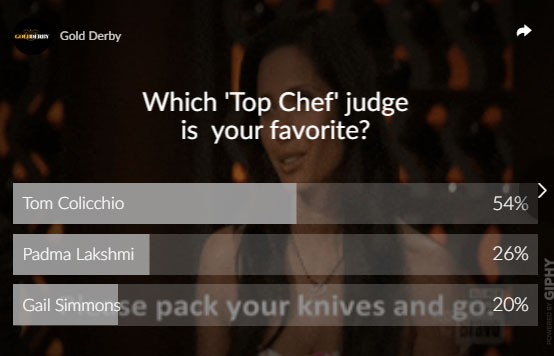 Be sure to make your predictions so that the contestants can see how they’re faring in our racetrack odds. You can keep changing your predictions until just before the next episode airs every Thursday on Bravo. You’ll compete to win a spot on our leaderboard and eternal bragging rights. See our contest rules and sound off with other fans in our reality TV forum. Read more Gold Derby entertainment news