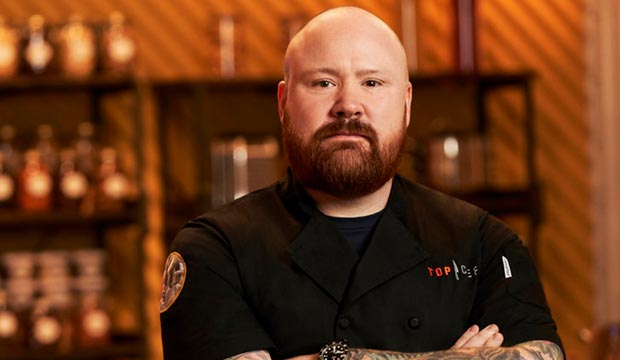 When Atlanta-based restaurateur Kevin Gillespie, 37,  competed on the sixth season of Bravo’s “Top Chef,” he ended up in third place. But he came in first in the hearts of viewers when he earned the title of Fan Favorite. No less than Wolfgang Puck declared him his favorite of all the “Top Chef” alums.

This time Kevin is even more determined to win. As he said in the second episode of season 17, which pits a line-up of returning All-Stars against one another, he has a very good reason why he was psyched for another chance to show off his culinary stuff. “It’s to prove to myself that I am not dying.” Kevin had surgery to remove a tumor from his kidney and spent a year fighting to recover. After overcoming such a serious health issue, this guy with a dry sense of humor clearly has a fire in his belly to succeed.

That might be why 58% of the show’s fans thought he was the rightful winner of a challenge that honored late Los Angeles food critic Jonathan Gold. He served roasted pork (his favorite protein), mushroom and black current terrine topped with his grandmother’s apple butter. Little wonder that guest judge Ruth Reichl, who was Gold’s editor at Gourmet magazine, told Kevin she knows that Jonathan would have really loved his dish.

Not that he didn’t face some strong competition from those joining him in the top three finishers. Among poll respondents, 28% thought Bryan Voltaggio should have won for his short ribs with charred eggplant puree and 14% would have preferred that Nini Nguyen prevail clever masa variation on matzo ball soup.

All three of these chefs seemed to be a bit more agile about making choices and dealing with time issues. I am looking forward to seeing what they do during the rest of the season.