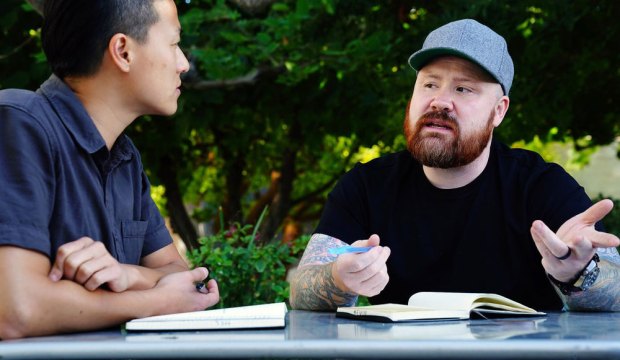 Last week “Top Chef” went from six contestants to five … and then back to six. Karen Akunowicz was eliminated (for the second time) after “Colossal Coliseum Kaiseki.” Then she lost in “Last Chance Kitchen” to Kevin Gillespie, who earned his way back into the competition. But can Gillespie actually win after he was eliminated once already? Quite possibly. It has happened three times before.

SEE‘Top Chef’ judge Tom Colicchio gets crabby in the most delicious way on ‘What Would Tom Do?’ [WATCH]

Kristen Kish (season 10), Brooke Williamson (season 14) and Joseph Flamm (season 15) were all eliminated from the competition, fought their way back through “Last Chance Kitchen” and ultimately won the whole enchilada. So there’s plenty of precedent. And Gillespie’s rivals should be even more worried because the challenge he was eliminated on, “Restaurant Wars,” was the only time he received any criticism from the judges this season.

He led his team to defeat in “Restaurant Wars,” overextending them with way more dishes than they could’ve reasonably handled — 12 of them! But he’s been golden everywhere else. He won three quickfire challenges and three elimination challenges. Then in “LCK” he beat Nini Nguyen, Lee Anne Wong and Akunowicz in head-to-head challenges.

But he wasn’t done. To get back into the competition once and for all he had to face three of the chefs still in the competition. He lost one round to Bryan Voltaggio, but he beat Brian Malarkey and Gregory Gourdet. So even with his elimination, he’s by far the winningest chef of the season thus far.

However, he still has a lot to prove, at least according to the “Top Chef” fans who have placed their bets here in our predictions center. As of this writing we rank him fifth with 56/1 odds. Compare that to “Restaurant Wars” week when he ranked fourth with far better 21/2 odds. You run one restaurant into the ground and all of a sudden people lose faith in you. Well, he’s proven thus far that it’s a bad idea to underestimate him.