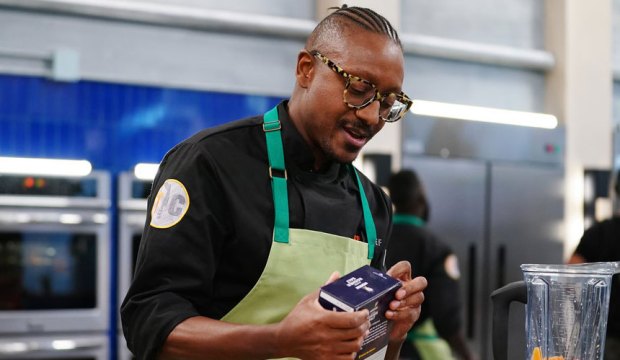 “Top Chef: All-Stars L.A.” premiered on Thursday night, March 19, with 15 past cheftestants getting another chance to win the cooking competition that left them high and dry the last time they vied for the title. Gregory Gourdet won the first challenge, and now he’s the front-runner to win the title according to the combined predictions of fans who have made their forecasts here in our predictions center.

SEE‘Top Chef’ season 17 has a new after-show: ‘What Would Tom Do?’ [WATCH VIDEO]

The season premiere episode got off to a slow start for Gourdet, whose struggle with preparing artichokes and oranges during the Quickfire Challenge left him on the team with the least amount of time to complete their dish. His team ended up losing that challenge, but things turned around when he was chosen to compete on the yellow team with Jamie Lynch and Stephanie Cmar for the Elimination Challenge.

That task was to make family-style seafood meals that would be cooked only with flame and served to a table full of famous chefs on Cabrillo Beach. His team had the most cohesive meal and won the challenge, and Gourdet’s dish, a perfectly cooked charred salmon with grilled peaches and roasted chili dressing, was selected as the star of the show. Poor Joe Sasto was sent packing.

SEEJoe Sasto’s ‘Top Chef’ 17 exit interview: “If you go out because everyone cooked really great food, then you got to be proud.’ [POLL]

Gourdet previously appeared on the show in season 12, where he won five elimination challenges, more than any other chef that season. And he also won four Quickfire Challenges, which was also the most of any chef. But he ended up finishing second overall behind winning chef Mei Lin. But he’s off to a good start again this year, and he currently gets leading odds of 9/1 to prevail, followed by season six runner-up Bryan Voltaggio with 12/1 odds.

But it’s early yet. The competition has just begun, so anyone could still catch fire, and anyone could go up in smoke.