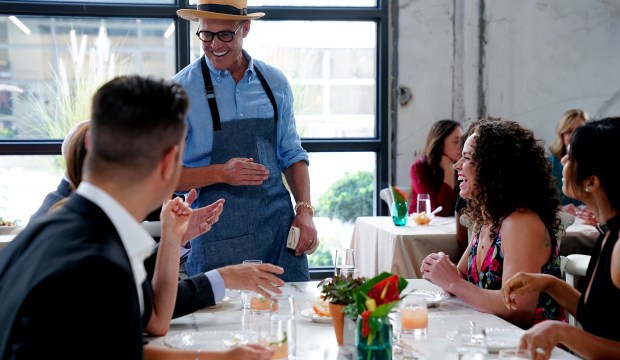 At the end of last week’s “Top Chef: All-Stars” episode, which was a prelude to this week’s Restaurant Wars, Kevin Gillespie and Gregory Gourdet‘s concepts for their eateries — the family-style Southern Country Captain and the Haitian-themed Kann — were picked to be used by the two teams of chefs. As we can see from the preview for Thursday’s consequential show (watch it below), Gregory has Lee Anne Wong, Stephanie Cmar and Brian Malarkey onboard his team while Kevin is joined by Bryan Voltaggio, Melissa King and Karen Akunowicz as his cohorts.

We hear head judge Tom Colicchio say as he is seated at a table, presumably at Kann, “There’s not a lot of people eating right now. Empty, empty.” Then we see Karen spill a glass of red wine on a full table at Country Captain. She admits in a confessional, “The judges are going to walk into a very crowded restaurant.” Yep, chaos as usual reigns during the Bravo reality competition’s most difficult challenge of each season. Then we hear Lee Anne admit to a couple of servers, “Just confusion, yeah.” And Kevin is upset that plates of food are missing.

I guess this is why it is called Restaurant Wars, since there are always casualties when it comes to balancing service and food preparation. In the Bravo preview clip, Stephanie asks Gregory to tell her more about the fish patties she is making. He says, “It’s usually like this really dense flakey dough. It’s either salt cod that’s a little spicy or chicken or beef.” It’s apparently a traditional item in Haiti.

He adds, “There are bakeries that only serve these patties and nothing else.” She also handles a plantain dish and some sort of ice cream. Stephanie admits it’s a lot of responsibility and a lot of weight to make food that represents someone’s culture.

Then we get to see the food prep in Kevin’s kitchen. Bryan says, “There’s a lot of stuff running through my head. Country Captain is 12 dishes and there is a lot to scrutinize. I don’t know if we’re over-exposed or not. But with this menu, this is a big load.” We are shown a sped-up rendering of the design of each restaurant’s dining room. Speaking of speed (or a lack thereof), Gregory tells Lee Anne she was “gone forever” after she gets a rack to store the prepared food.

Kevin, meanwhile, asks the three other chefs about the status of the dishes they are making. Karen admits she won’t be able to finish her dishes until the next day — “That sucks! I really need to get them done so I can focus on everything in the front of the house. But that is not going to happen.” Kevin suggests Melissa can lend her a hand since she will tied up greeting patrons. Gregory, however, says he feels “f*cking awesome.” Tune in to Bravo next Thursday at 10 p.m. ET/PT to see what other carnage might be in store for this All-Star edition of Restaurant Wars.

Be sure to make your predictions so that the contestants can see how they’re faring in our racetrack odds. You can keep changing your predictions until just before the next episode airs every Thursday on Bravo. You’ll compete to win a spot on our leaderboard and eternal bragging rights. See our contest rules and sound off with other fans in our reality TV forum.