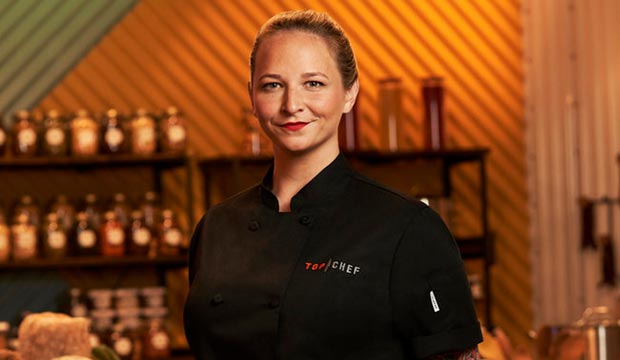 I’ll admit, after the first half of “Top Chef: All-Stars L.A.,” if you had told me that Stephanie Cmar would make the final three, I might not have believed you. She struggled early on in the season, and there were a few weeks when it seemed like she was hanging on by a thread. But you can never say never on this show. Cmar eventually found her groove and even exceeded her own expectations. Now that she’s among the final three, she’s so close to the title she can taste it.

Things started off well enough for Cmar. She was on the winning team in the very first elimination challenge along with Gregory Gourdet and Jamie Lynch, both of whom she has outlasted. But over the next six weeks she was at the bottom four times, so things weren’t looking too good for her future on the show.

Then came “Restaurant Wars.” She was on a team of underdogs with Brian Malarkey, Lee Anne Wong and team leader Gourdet, but they won the battle. Perhaps that was the vote of confidence she needed because her track record since then has been like night and day. She won her first solo challenge in “Colossal Coliseum Kaiseki,” and she was a close second in “Michael’s Santa Monica” and “Parma.” Her only low score since “Restaurant Wars” was in “Lucca,” but that tricky truffle challenge tripped up most of the chefs to one degree or another.

Now she’s going into the finale against Bryan Voltaggio, who was the runner-up in previous seasons of both “Top Chef” and “Top Chef Masters,” and Melissa King, who has more wins this season than any other chef (including the last three elimination challenges in a row). This is already the best Cmar has ever done, following her seventh-place finish in season 11. But even though she may be an underdog in the final episode, she has already won two challenges against Voltaggio and King. If she can do it a third time, she’ll win the whole delicious enchilada.