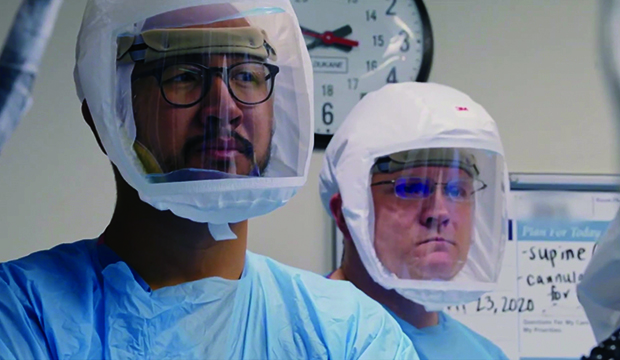 Oscar winner Alex Gibney‘s new documentary “Totally Under Control,” which he wrote and co-directed with Ophelia Harutyunyan and Suzanne Hillinger, is already available to rent on demand via streaming services, but will be more widely available through Hulu beginning Tuesday, Oct. 20. The film is another addition to the sea of information about how the United States government mishandled the initial response to the threat of the COVID-19 pandemic. In that regard, it’s not as much an enlightening documentary as a timely one, seemingly aimed at giving voice to scientists and public health experts who appear in the film to narrate all the ways the Trump administration’s response failed the country.

As the documentarian behind the 2019 Emmy nominee “The Inventor: Out for Blood in Silicon Valley” and 2015 Emmy winner “Going Clear: Scientology & the Prison of Belief,” as well as the film for which he won the Oscar “Taxi to the Dark Side” (2007), Gibney is no stranger to investigative journalism or the accolades that can follow for documenting such incisive commentary on ultra current news. He’s certainly operating in his wheelhouse here, collecting testimonials from researchers and scientists within the government, health experts on the ground in U.S. hospitals, PPE manufacturers, task force insiders and infectious disease experts who more or less predicted America’s devastating outcome in January — all to piece together a play-by-play that in just two hours provides a comprehensive timeline of the Trump administration’s mishandling of the pandemic as U.S. deaths near 220,000 now.

Over the years, political-minded exposés, like Gibney’s Oscar winner more than a decade ago that examined the U.S. government’s policies on torture overseas, have had an uneven track record when it comes to the Oscar race. For every winner like “Citizenfour” (2014) and “Inside Job” (2010), there’s a “Fahrenheit 9/11” (2004) and “Dark Money” (2018) that have buzz and good reviews throughout the season but don’t make the Oscar lineup.

As of this writing, “Totally Under Control” boasts a score of 81 on Metacritic and 100 percent rating on Rotten Tomatoes, but without the critical credibility of showcases at national film festivals, it will have to rely on buzz and word of mouth as its strongest assets in the awards race. Surely the availability of it via Hulu will make it accessible to a wide audience and with the presidential election looming and the country eyeing a potential second wave of the pandemic as deaths, it’s a subject that will continue to be on everyone’s mind.

Make your predictions at Gold Derby now. Download our free and easy app for Apple/iPhone devices or Android (Google Play) to compete against legions of other fans plus our experts and editors for best prediction accuracy scores. See our latest prediction champs. Can you top our esteemed leaderboards next? Always remember to keep your predictions updated because they impact our latest racetrack odds, which terrify Hollywood chiefs and stars. Don’t miss the fun. Speak up and share your huffy opinions in our famous forums where 5,000 showbiz leaders lurk every day to track latest awards buzz. Everybody wants to know: What do you think? Who do you predict and why