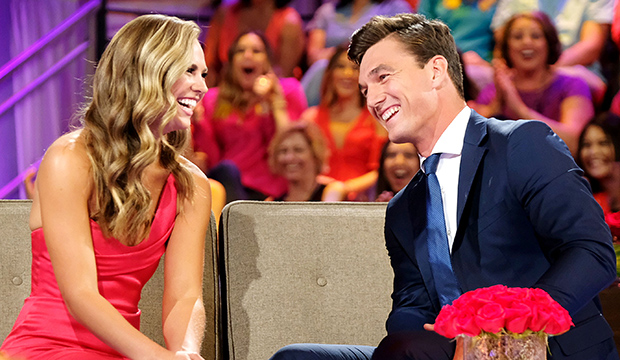 Before Peter Weber and Kelley Flanagan galavanted in Chicago, Hannah Brown and Tyler Cameron were the Bachelor Nation quarantine duo that had everyone talking in March. But they were actually never planning on quarantining together.

“We kind of reconnected over some things that we were both going through and we were there for each other,” Cameron told “Entertainment Tonight” (watch below), referring to his mother Andrea’s death from a brain aneurysm in February and Brown’s brother Patrick recovering from an overdose in early March. “And it wasn’t ever supposed to be that long or quarantine at all. It was just supposed to be like a weekend and things kind of got a little crazy, like quarantining and everything like that. So it was a lot longer of a trip than expected, but it was good.”

SEE Hannah Brown admits she had doubts and faked a smile through Jed Wyatt’s ‘Bachelorette’ proposal: ‘This ain’t it’

Brown has since returned to Alabama, but in the month she spent in her “Bachelorette” runner-up’s hometown of Jupiter, Fla., the pair and their Quarantine Crew posted endless TikToks and had fans speculating whether they had rekindled their relationship. Even Chris Harrison offered to officiate their wedding. But both have said they’re single. “We got to kind of air a lot of things out and become friends again and put a lot of stuff in our past,” Cameron said.

“It was definitely nice to have her here,” he continued. “She was someone to talk to about things and be around for everyone. She was great. And she’s someone that can listen and give her perspective and she’s very pleasant in that setting.”

While Brown said on Instagram Live last week that she “definitely” wants to be in a relationship again, Cameron is “not worried about dating one bit” because “right now, there’s just too much going on in my world to really give someone all of me, and that’s what’s important in a relationship.”

The contractor, who has a new Quibi show “Barkitecture,” on which he builds customized doghouses for celebrity pups, also isn’t sure he’d accept a gig to headline “The Bachelor” if offered, preferring to focus on his family and launching his constructing company. Since Clare Crawley‘s season of “The Bachelorette” has been delayed due to the coronavirus pandemic and is looking to film in late summer for a September premiere, that would theoretically exclude her suitors — which includes Cameron’s BFF and roommate Matt James — from being the Bachelor if “The Bachelor” gets to film in September as usual.

“I don’t know if the timing right now is good for it. I feel that a lot of things that have happened in my life lately. I think there’s a lot of things that I want to get going in my life as well. I want to get my construction company running and all that,” he shared. “That’s important to me. This whole world — having followers and all this stuff is great and all — but I want something that’s long-lasting and I can have forever. And that’s what I hope to see in the construction company and so my goal is to get that going and, you know, have hopefully something I can have with my kids one day and they can have.”