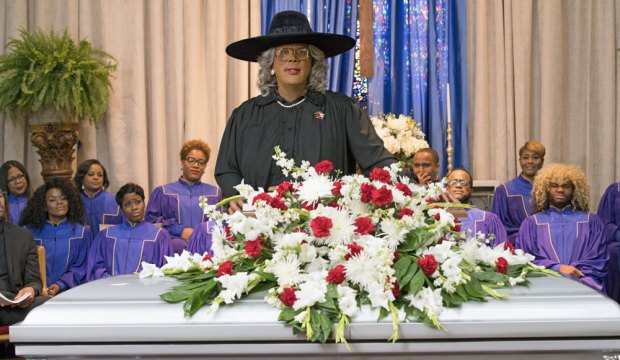 Will Tyler Perry win his third Worst Actress Razzie Award for playing his signature role as Madea in “A Madea Family Funeral”? It was purported to be the final Madea movie, so perhaps the Razzies will want to send him out with a bang — or with a bomb, as it were. But might it also be time to retire the Razzies trend of nominating male actors for female roles?

Perry is certainly not the only male performer who has been nominated across gender categories for playing a role in drag. Adam Sandler won Worst Actor and Worst Actress for playing twin siblings in “Jack and Jill” (2011), and the Razzies have also nominated Shawn Wayans, Marlon Wayans and Martin Lawrence in this category for female characters.

But Perry is the only man who has won it twice, for “A Madea Christmas” (2013) and “Boo 2! A Madea Halloween” (2017). A third victory would tie Perry with Bo Derek as the second most awarded “actress” of all time. The all-time biggest winner is Madonna, who won five times out of six nominations.

Perhaps Perry should be the last male actor nominated for Worst Actress, though. It’s not that a man is robbing a woman of a hard-earned nomination for being bad in a movie. I suspect women in Hollywood would be relieved to be excluded. But there may be an implication in a Worst Actress nomination for a male actor that the indignity is not just in giving a bad performance but in doing it as a woman.

That’s not to say the Madea movies should be respected for their nuanced takes on gender identity, but in an era of increased visibility for trans, non-binary or gender non-conforming people in Hollywood and beyond, the optics of Worst Actress for male actors in drag are more complicated than they used to be.

It might be a moot point, though, since Hilary Duff is the current front-runner to win Worst Actress for playing the title character in “The Haunting of Sharon Tate,” according on the combined predictions of more than 1,000 Gold Derby users. The film was considered an exploitative take on the real-life murder it dramatizes, which was also the subject of one of this year’s Oscar-winning films, “Once Upon a Time in Hollywood.”

Who do you think will win this year, and how do you think the Razzies should approach the Madeas of the future. Make your predictions here, and vote in our poll below.