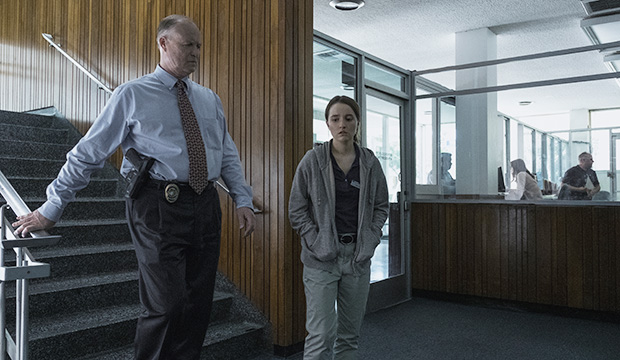 After winning her inaugural Emmy on her first try in 2015 for directing the HBO miniseries “Olive Kitteridge,” Lisa Cholodenko looks to return to the Best Limited Series/TV Movie Directing lineup for Netflix’s “Unbelievable.” She helmed the first three episodes, of which she chose the opener to enter at the Emmys.

The premiere centers on Kaitlyn Dever’s Marie Adler, an 18-year-old who reports being raped at knifepoint to the local police station in Lynnwood, Washington. The story is told through Marie’s eyes, through which the world becomes cold and bleak as she grapples with trauma, all while being confronted with inklings of doubt from the people around her. With her grounded direction and tight collaboration with cinematographer Quyen Tran (who uses a veristic color palette throughout), Cholodenko crafts an uber-realistic atmosphere, which not only sets the tone for the show, but is a pivotal step toward immersing viewers into Marie’s situation.

When Marie is questioned by the police after inconsistencies in her report surface, the power dynamic is established by Cholodenko through contrasting shot compositions: a fragile, vulnerable Marie opposite two dominant male officers, whom the director often shoots from a lower angle to make their looming presence palpable. Because she defined the show’s perspective so precisely early on, it becomes increasingly uncomfortable to watch the questioning play out, particularly when the officers begin exhorting Marie to say she made up the attack. Her reaction is captured with a low-angle shot from under the table, accentuating how she’s being pushed into a corner. Cholodenko amps up the tension with the help of editor Jeffrey M. Werner, who quickly cuts back and forth between Marie and the officers, effectively peppering in two close-up shots of her shaky hands and legs.

When the show was released in September, Dever told Entertainment Weekly that it was the most challenging project she had done in her career. She went on to explain that during the filming of the assault, of which we get glimpses throughout the first episode, it was a closed set, with only camera and boom operators present. Because Cholodenko, among others, created a comfortable environment for Dever off the bat, the actress was able to grab the bull by the horns and ride with it, her performance already earning her Critics’ Choice, Golden Globe and Television Critics Association Awards nominations. Cholodenko’s care also extends to the other actors, from whom she’s able to pull out memorable performances despite their roles being smaller, particularly Bridget Everett, Elizabeth Marvel and Eric Lange (who plays one of the two male detectives).

In the second and third episodes — which introduce Merritt Wever’s Karen Duvall and Toni Collette’s Grace Rasmussen, two Colorado detectives who team up after they discover uncanny similarities between several rape cases in their state (three years after Marie’s report) — Cholodenko anchors the show’s central themes while entrusting the two aforementioned Emmy-winning actresses to steer the ship. The director handles a subject matter as severe as rape with sensitivity and precision, using this story to juxtapose the abuse of authority by the show’s male police officers with the care and empathy with which our two female detectives instantaneously treat victims.

A winner for “Oliver Kitteridge,” Cholodenko was omitted at the Directors Guild Awards for “Unbelievable” earlier this year in favor of “Chernobyl’s” Johan Renck (who won), “El Camino: A Breaking Bad Movie’s” Vince Gilligan, “Fosse/Verdon’s” Thomas Kail, Minkie Spiro and Jessica Yu, and “When They See Us’” Ava DuVernay. The good news for Cholodenko is that Gilligan is the only one of the aforementioned directors eligible at the Emmys as the others competed last year. “Unbelievable” did, however, bag Producers, Screen Actors and Writers Guilds Awards citations, as well as four Critics’ Choice and Globe noms apiece. Third in our odds, the show has established itself as a formidable player in the race for Best Limited Series (for which Cholodenko also contends as an executive producer), which could help carry her along for a nomination.

With an Academy Award bid (shared with Stuart Blumberg in Best Original Screenplay for 2010’s “The Kids Are All Right”) and an Emmy win under her belt, Cholodenko is an established director, and with individual names listed on the directing ballots, that could put her at an advantage with the branch often gravitating toward familiar names. Joining her on the ballot are fellow “Unbelievable” directors Michael Dinner, who submitted the sixth episode, and writer-creator Susannah Grant, who submitted the seventh, in which the serial rapist is caught and Marie utters the line from which the show takes its title. But Cholodenko doesn’t have to worry about splitting the vote with her colleagues since voters have unlimited slots on their nominating ballots.