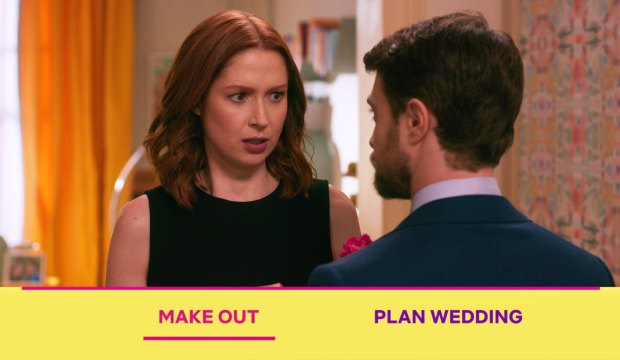 “Unbreakable Kimmy Schmidt” ended its regular series run in early 2019, but creators Tina Fey and Robert Carlock wasted little time in reuniting the gang for another absurd comic adventure. “Kimmy vs. the Reverend” arrived May 12 not just as a continuation of the original series, but as Netflix’s second interactive special, following the choose-your-own-path “Black Mirror: Bandersnatch.” So what do critics think of this new story — or stories?

As of this writing the film has a MetaCritic score of 77 based on seven reviews counted thus far: six positive, one somewhat mixed and none outright negative. On Rotten Tomatoes, which classifies reviews simply as positive or negative and not on a sliding scale like MetaCritic uses, it is rated 90% fresh based on 21 reviews, only two of which are deemed negative. The RT critics’ consensus sums up the reviews by saying, “Kimmy and company return as resilient as ever in a fun and fast paced special that makes excellent use of its interactive capabilities to produce maximum fabulosity.”

The special is being described as “seamless” and “fun.” Its ease “belies the tremendous amount of work that must have gone into it,” and “it brings nothing but joy.” Critics also note a key difference between “Kimmy vs. the Reverend” and “Bandersnatch”: where the “Black Mirror” special took different plot turns, the interactive element of this project serves more as a delivery system for a wide variety of jokes. Fey, Carlock and company fill the show with “alts,” or alternative jokes that are usually shot to give a director and editor multiple options for a scene, and the gags are “wonderfully silly.”

So can “Kimmy Schmidt” finally win an Emmy (dammit)? The show earned 18 total Emmy nominations over the course of its original run, but it hasn’t won in any category. That could change now that it competes in the less crowded race for Best TV Movie, where it has the advantage of already being familiar to Emmy voters. And it helps that there is precedent for an interactive Emmy winner: “Bandersnatch” won Best TV Movie just last year, which was the third victory in a row for a “Black Mirror” film.

Have you already played through “Kimmy vs. the Reverend”? If so, how many times? Check out some of the reviews below, and join the discussion on this and more here with your fellow TV fans.

Gwen Ihnat (The A.V. Club): “Intriguing tech options aside, all the one-liner, blink-and-you’ll-miss-them jokes that made ‘Kimmy Schmidt’ so much fun in the first place are thankfully still intact … The setup is so entertaining that it belies the tremendous amount of work that must have gone into it … The result is seamless, as plots veer off in different directions without ever feeling jarring.”

Liz Shannon Miller (Collider): “I played through ‘Kimmy vs. the Reverend’ three times … Even though the outcomes were different, all three experiences were a lot of fun … While the original ending for the series remains a perfect coda, it’s still nice to see Kimmy take yet another step forward on her journey, one which remains (as the theme songs says) a fascinating transition.”

Jen Chaney (Vulture): “It brings nothing but joy. While traditional choose-your-own-adventure stories are plot-driven, ‘Kimmy vs. the Reverend’ is plot-driven in theory but joke-driven in reality. The point of clicking on different choices … isn’t to skip to the next, unexpected twist, but to discover more wonderfully silly jokes … Fans of the series, which officially ended its episodic run in 2019, can expect more of all the things they loved about ‘Unbreakable Kimmy Schmidt’ the series.”

Alan Sepinwall (Rolling Stone): “‘Kimmy Schmidt’ has the advantage of a quartet of established characters … and four seasons worth of adventures to bank the audience’s affection. Just as importantly, Fey and the special’s co-writers — Robert Carlock, Sam Means, and Meredith Scardino — primarily use the experiment as an alt-delivery system, hanging as many different jokes as possible on the spine of a story that mostly doesn’t change.”

MAKE YOUR PREDICTION: What will win Best TV Movie?
To save your prediction, you must log in to Gold Derby. Click here to sign in with existing account -- or create a new one.
PREDICTthe 2020 Emmy nominees now; change through July 28