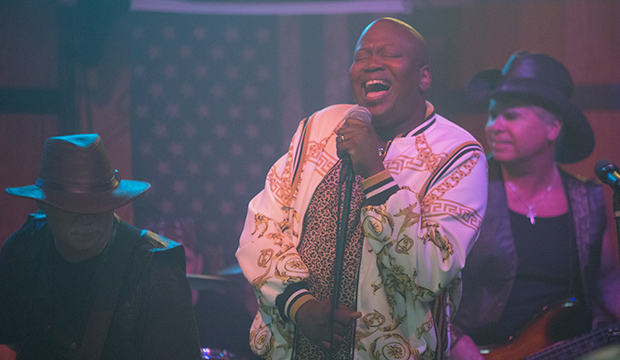 Despite four Best Comedy Supporting Actor nominations, Tituss Burgess has yet to win an Emmy for his Hall of Fame performance as Titus Andromedon on “Unbreakable Kimmy Schmidt.” But he has one final shot, in a completely different category, and he only has to look to Laura Linney to know it can be done.

Burgess is in the Best Limited/TV Movie Supporting Actor race this year for the Netflix comedy’s interactive special “Unbreakable Kimmy Schmidt: Kimmy vs. the Reverend.” Like Burgess, Linney also jumped over to limited from comedy for “The Big C: Hereafter” in 2013. “Hereafter” was the fourth and final season of “The Big C,” but the four-episode installment and the rules at the time allowed Showtime to submit it as a limited series instead of as a comedy, which was the show’s designation for its first three outings. Linney was nominated for Best Comedy Actress for the inaugural season in 2011 and was widely expected to prevail, but Melissa McCarthy (“Mike & Molly”) upset for the win (and a literal crown).

That victory also gave Linney an Emmy for every role for which she had been nominated up to that point (she won for her guest spot on “Frasier” in 2004) — a streak that could continue this year as she’s sitting in second place in our odds in Best Drama Actress for “Ozark.”

Unlike Linney, Burgess heads into this race without any Emmys, which could actually help him if any voter feels he’s been robbed. He delivers another hilarious standout performance as Kimmy’s (Ellie Kemper) BFF, journeying with her to Frackwater, West Virginia, to help her rescue another group of mole women the Reverend (Jon Hamm) had trapped in a bunker. With a slew of options and algorithms for viewers to check out, the interactive nature of the special affords Burgess and the entire cast numerous opportunities to show off their versatility and skill.

Titus nearly dies trying to exercise, devours dirt and plants while hallucinating, reads a baby to filth, and in his biggest showcase, puts on an absolutely surreal, delightful performance of “Free Bird” (but can also put on a messy ad-libbed one that ends with a 911 call) in a Frackwater bar. (Pro tip No. 1: Choose the “he knows it” option here.) “All four years of high school English was the poetry of Lynyrd Skynyrd,” Titus says before strutting to the stage. (Pro tip No. 2: Choose “watch full song” for the complete experience.)

Burgess’ infectious turn is a reminder of why he instantly became a breakout fan favorite when “Kimmy” premiered in 2015 and why he’s been the most nominated performer of the cast. The show, which is 0-18 at the Emmys, received just two bids in 2018: Best Comedy Series and Best Comedy Supporting Actor for Burgess. It was completely blanked last year for the final six episodes of its fourth season, which is obviously not great, but don’t hold Burgess’ miss against him. Last year’s race saw the return of a two-time champ (“Veep’s” Tony Hale) and a “Barry” windfall with three slots for Anthony Carrigan, Stephen Root and Henry Winkler that even the Hot Priest himself, Andrew Scott, from the Best Comedy Series winner and steamroller, “Fleabag,” was left out in the cold.

It was a tough field, and “Kimmy” was on its way out, so to speak, of the comedy categories by then, considering its dwindling nomination count every year, but the special is a whole different beast; Burgess’ new category, a whole other story. While Jim Parsons (“Hollywood”) has been perched in the top spot of our limited/TV movie supporting actor odds the entire season so far, the category itself is pretty open for any combo of contenders to make the cut. And the reigning Golden Globe champ, Stellan Skarsgard (“Chernobyl”), competed last year, so no one has any momentum from a precursor win (Skarsgard also won Critics’ Choice).

In terms of winning, Parsons — who hasn’t been nominated for acting since his dual bids in 2014 for “The Normal Heart” and “The Big Bang Theory,” the latter of which won him his record-tying fourth comedy actor Emmy — could suffer from a vote-split if his co-stars Joe Mantello and former champ Darren Criss snag bids as expected (“Hollywood” stars Dylan McDermott and Jake Picking are also in the running).

Plus, Burgess is the apple in a bag of oranges here. Compared to the darker and/or more serious programs of his competitors, like “The Plot Against America,” “Watchmen” and “Mrs. America,” “Kimmy vs. the Reverend” is pure escapist fun, which may be what voters are looking for right now with the world on fire (“Hollywood” has a happy revisionist ending, but it’s still a lot more dramatic in tone, and its reception has been mixed at best). This show has a talking purple backpack; those others do not. “Kimmy” has always dealt with dark themes as well, given its entire premise, but with a brilliant, absurdist, wacky and sunny bent, oft repeating Kimmy’s mantra to “take it 10 seconds at a time.”

At the moment, Burgess is in eighth place in our odds, behind Parsons, Tim Blake Nelson (“Watchmen”), John Turturro (“The Plot Against America”), John Slattery (“Mrs. America”), Mantello, Criss and Jesse Plemons (“El Camino”). But don’t be surprised if he cracks the top six soon, at which point you might want to stock up on some Peeno Noir.

MAKE YOUR PREDICTION: Who'll win Emmy for Best Movie/Limited Supporting Actor?
To save your prediction, you must log in to Gold Derby. Click here to sign in with existing account -- or create a new one.