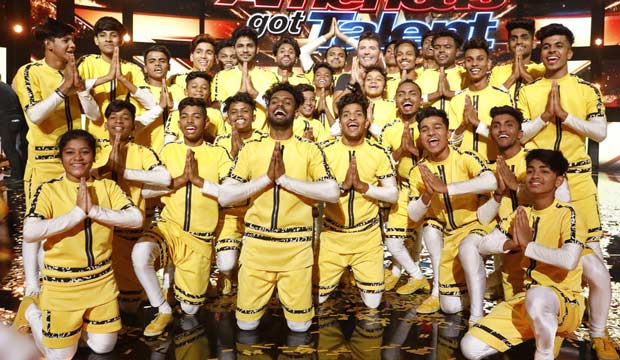 After seeing the 10 finalists on “America’s Got Talent: The Champions” performance finale Monday night I am 100% certain that India’s acrobatic dance group V.Unbeatable is going to win. The dancers earned their spot in the finale after Howie Mandel hit his Golden Buzzer for their first performance in the preliminaries. Because of that, they haven’t had to perform yet for the Superfans vote, but my guess is that the voters from all 50 states will be gobsmacked by their final routine. Watch their finale performance above and then hear me out on my five reasons why they’ll win.

1. Athleticism
When you look at the 10 finalists this season, a handful of them exhibit stellar athleticism. Duo Transcend and Sandou Trio Russian Bar are at the top of their games, but compared to V.Unbeatable are pigeon-holed into single niches (trapeze and Russian bar, respectively). Meanwhile, this group does it all: flips, dancing, tosses, etc. Put it this way, if “AGT” was a dessert, I’d say Duo Transcend is ice cream and Sandou Trio is the chocolate syrup, but then V.Unbeatable is the whole freaking sundae.

2. Energy
While their energy is always off the charts, I think their decision to begin their performance from the judges’ table brought some extra pizzazz to an already dynamic presentation. Having one member be tossed and flip his way from the table to the stage made for a dynamic transition that put them on pace to be high energy for the rest of the performance. With so many members on stage at once it would be easy for the routine to feel distracting, but they utilize most of the members in dancing formation out front so that all the focus and energy is directed at the acrobats doing tricks in the air and across the stage. They always choose uptempo music that speaks both to their culture and dedication to high energy.

3. Precision
One of the most important aspects of large dance groups is precision, the ability to move in unison and for each member to hit their intended mark at the intended time. No group in “AGT” history is as precise as V.Unbeatable. The dancers making up most of the group always move as if they’re one organism, and honestly that could be enough to be impressive. But then they have smaller members doing incredible tumbling and tossing passes with just as much perfection. On Monday night they incorporated bicycles into their routine, ending with one member being tossed and doing flips on to the seat of a bicycle raised up in the air. Can you imagine having to land perfectly and with such control on that thin of an apparatus?! I can’t! Also: ouch?!

4. Story
On season 14 of “AGT,” V.Unbeatable looked liked the favorite to win, but came up short on finale night finishing 4th place, runners-up to champion Kodi Lee. Their return to the series has been strong, getting their second Golden Buzzer (Dwayne Wade gave them one on season 14) and earning effusive praise from the judges panel after both performances this season. That they come from “AGT,” but are representing India means that they will appeal to superfans who know and love acts from the American version of the show, but also prove that champions come from all parts of the world.

5. “Cheer” mania
Yes, that’s right. I’m conjuring the mania of the Netflix docuseries “Cheer” in support of V.Unbeatable. Like the legendary city college cheerleaders of that series, the members of V.Unbeatable tap into the excitement and craze that comes from watching humans create incredible formations together using tumbling passes, human pyramids, flips and perfect landings. There’s something inexplicably thrilling about watching people use each other’s bodies as the tools to achieve their tricks and formations. To do it well, they have to work as a team and must depend on each of them moving in unison and with the same goal in mind. It’s truly like watching a machine at work!

In judges’ critiques, Howie called them “by far” the best act to ever appear on “AGT.” He called on their passion and dedication as something that sets them apart from everyone else. Do you agree with Howie that V.Unbeatable is the best act ever? Do you agree with me that they’re going to win? Sound off in the comments and let us know your own thoughts!