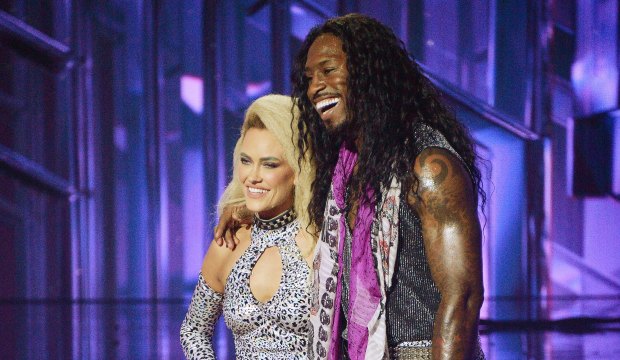 Football stars often rule the ballroom on “Dancing with the Stars,” but Vernon Davis hasn’t quite found his footing in season 29. Is he doomed to be eliminated tonight when the top 11 perform for judges’ scores and viewer votes?

As of this writing he’s the likeliest celeb to get the axe based on the combined predictions of fans who have placed their bets here in our predictions center. He gets leading 71/20 odds of being sent home from the competition. It has been an inconsistent, somewhat confusing season for the NFL veteran. On “Top 13” night he was mistakenly announced as one of the bottom two in a bizarre behind-the-scenes error. But he really did land in the bottom two on “’80s Night,” when the judges unanimously voted to save him and eliminate actor Jesse Metcalfe instead.

So he’s still alive in the competition, but for how long? Landing at the bottom means he’s not getting enough love from the viewing audience voting from home, but it’s not necessarily a foregone conclusion that he’ll land in the bottom again. After all, “Cheer” coach Monica Aldama really was in the bottom two on “Top 13” night after that weird error was corrected, but she performed well enough on “’80s Night” not to be at the bottom at all.

DISCUSS‘Dancing with the Stars’ in our notorious forums

His close brush with elimination might light a fire under him that elevates his performance tonight. And if any of his fans had been sitting on their hands before now, they might be fired up too, giving him the votes he needs to make it into the top 10. The good news for him is that he has scored better on average this season than actress and reality star Chrishell Stause and rapper Nelly, so even if he lands in the bottom two again, the judges might vote him back to safety.

It all depends on how well he and his rivals perform tonight. How do you think they’ll do, and who will be ousted as a result?