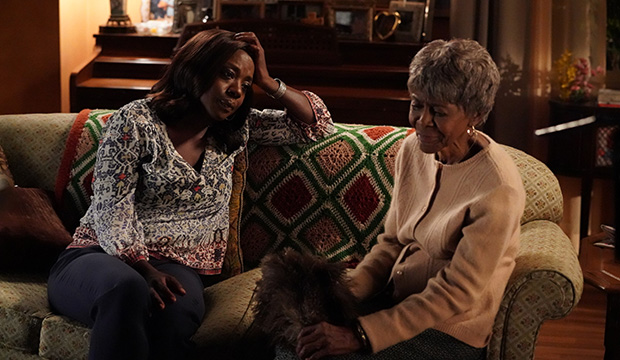 “How to Get Away With Murder’s” leading lady Viola Davis and perennial guest star Cicely Tyson have both bagged four Emmy Award nominations for their work on the ABC series, in Best Drama Actress (2015-17, 2019) and Best Drama Guest Actress (2015, 2017-19) respectively. Will they return to the Emmy lineup for the show’s sixth and farewell season, which concludes in early May?

Save for the fourth season, Davis has been recognized for all of “Murder’s” seasons so far and was able to scoop up her maiden career win on her first try in 2015, becoming the first African-American actress to win that prize. But even when for the fourth season she was left out of the drama actress lineup in 2018, Emmy voters compensated for her omission by including her in Best Drama Guest Actress for playing her “Murder” character Annalise Keating on “Scandal” as part of a two-way crossover between the Shondaland shows. And going off her perfect five-year streak and the fact that she returned to the drama actress lineup last year when no one expected it (she was down in 10th place in our combined odds), it wouldn’t be surprising to see her complete “Murder’s” six-year run fittingly with a sixth Emmy nom.

It’s also worth noting that in addition to her Emmy, Davis has racked up one Academy Award and Golden Globe, respectively (both for 2016’s feature “Fences”), as well as five Screen Actors Guild and two Tony Awards. So, she isn’t just an Emmy favorite, but an industry darling altogether who might just be able to snag that Emmy bid on name alone.

That’s not to say that she wouldn’t sneak in on the merits of her work, as she’s continued to deliver the goods in “Murder’s” sixth season. While the final six episodes are still sight unseen, the first nine gave Davis a lot to chew on, especially the season opener “Say Goodbye,” which sees Annalise retreat to a rehabilitation center following Laurel’s (Karla Souza) sudden disappearance and Emmett’s (Timothy Hutton) death. Particularly with this climactic scene, in which Annalise channels all her self-hatred and self-blame but also finds a way to forgive herself, the opener is tailor-made for Davis’s Emmy submission should be shortlisted. But with the flash-forwards jumping ahead to what seems like Annalise’s funeral, Davis’s biggest showcase might still lie ahead.

Tyson, who plays Annalise’s no-nonsense mother Ophelia Harkness, has had a similar trajectory to that of her TV daughter at the Emmys in that she’s been nominated for each one of “Murder’s” outings except for one, which in her case is the second season (unlike Davis, she has yet to win for the show, however). But since she was also on the drama guest actress ballot for “House of Cards” that same year, her snub was likely a result of her splitting her own vote, especially as she managed to return for “Murder” the two following years when she wasn’t on the ballot for any other show.

Having worked in the industry for nearly 64 years and still working at the age of 95, Tyson is a living legend. While she does have a whopping 15 Emmy citations and three wins under her belt, her last win was 26 years ago for “Oldest Living Confederate Widow Tells All” in Best Limited Series/TV Movie Supporting Actress. Although the was the heavy favorite to win Best Limited Series/TV Movie Actress for the TV movie “The Trip to Bountiful” in 2014 and for “Murder” on her first try in 2015, she lost those awards to Jessica Lange (“American Horror Story: Coven”) and Margo Martindale (“The Americans”), respectively. This being voters’ final and only chance to recognize Tyson for “Murder” could tip her over the edge for another nomination and perhaps even a win.

While she has yet to make her first appearance in the show’s sixth season, it’s safe to assume that she’ll be given the same juicy material like in past seasons. And with her daughter potentially breathing her last, she might deliver exactly the type of emotional gut punch that finally pushes her to the finish line for this show.

Working in both actresses’ favor is that they’ve never had to rely on the TV academy’s broad support for “Murder.” In fact, for the first four seasons they were the show’s sole representation at the Emmys; last year, Glynn Turman helped the show break into Best Drama Guest Actor for the first time. And speaking of Turman, thanks to him, Davis and Tyson all scoring nominations last year, “Murder” saw its most-ever Emmy citations for a single season, which could be a sign that voters are, indeed, paying attention to it despite its lack of across-the-board support. This bodes particularly well for Davis and Tyson’s chances this year as the show could be top of mind come voting with the final episodes airing in the last two months of eligibility.