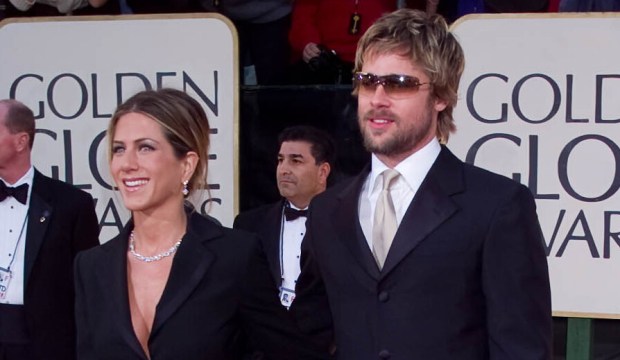 On January 19, before masks were a thing,  fans of tabloid romances went bonkers when ex-spouses Jennifer Aniston and Brad Pitt ran into each other at the Screen Actors Guild Awards. The former couple, who were married from 2000 to 2005, reunited backstage and warmly offered each other congratulations with hugs, smiles and hand-holding.

Aniston won for lead actress in a drama series for her role as an a.m. TV co-host on “The Morning Show.” Meanwhile, Pitt kissed his trophy onstage after snagging a win for his supporting role as a stuntman in Quentin Tarantino’s showbiz fairy tale, “Once Upon a Time in  Hollywood.” He also was spied intently watching his ex-wife’s acceptance speech on a TV monitor.

With the announcement of the 72nd Emmy Awards nominations this week, the photogenic pair are both up for honors again. Aniston is hoping to repeat her win for “The Morning Show” while Pitt sneaked onto the ballot as a guest actor on a comedy series by making coronavirus czar Anthony Fauci‘s dream come true by playing the popular doctor on “Saturday Night Live.”

Alas, even a faux Fauci would not want some of the top TV stars in the world to swap germs and infect one another at a large gathering, no matter how glamorous. That is why the Emmys will be going the virtual route for their live ceremony hosted by Jimmy Kimmel that will air on September 20 on ABC. In a letter sent to all nominees, they were told that the show would come to the location of their choice.

With no backstage to bump into one another, Brad and Jen just might want to appear in one of their living rooms — sitting six feet apart with masks, natch — just to get their fans buzzing again. At least enjoy the photo above of the couple in happier days when they attended the 59th Golden Globes in 2002.