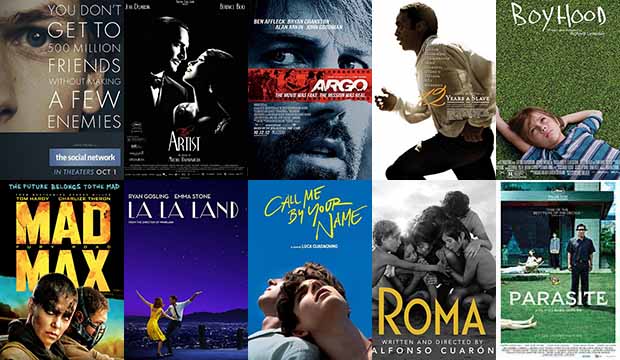 “Parasite” just won our 18th Annual Gold Derby Award for Best Picture, but how does it compare to the other best movies from 2010-2019. For the second time we’re conducting the Gold Derby Decade Awards for film. You can start voting for them right now here in our predictions center and keep entering or updating your picks as often as you like until the end of the night on Friday, February 21.

There are 22 categories to vote for. To qualify for our lists of prospective candidates in 20 of those categories, including Best Picture, you must have been nominated for that award at our yearly Gold Derby Awards and/or at the Oscars.

The candidates for Best Ensemble Cast consist of films that were nominated in that category at our yearly Gold Derby Awards and/or the SAG Awards.

The candidates for Performer of the Decade were curated by Gold Derby’s Editors based on the quality and quantity of their output over the 10 year period.

The last time we held our Decade Awards in 2010 (honoring the best films of 2000-2009), “The Lord of the Rings: The Return of the King” was our choice for Best Picture and Best Director (Peter Jackson), while lead-acting honors went to Daniel Day-Lewis (“There Will Be Blood”) and Charlize Theron (“Monster”).

Supporting prizes went to Heath Ledger (“The Dark Knight”) and Mo’Nique (“Precious”). The best written films were “Brokeback Mountain” (Adapted Screenplay) and “Eternal Sunshine of the Spotless Mind” (Original Screenplay), while the Performer of the Decade was Meryl Streep, who could conceivably win that award again this decade.

How do you think the 2010s have compared to the 2000s? Cast your votes now to support your favorites. Detailed voting instructions are below.

3) Select a category, add your favorite candidates from the left column to the right column, and save your top five choices in order of preference.