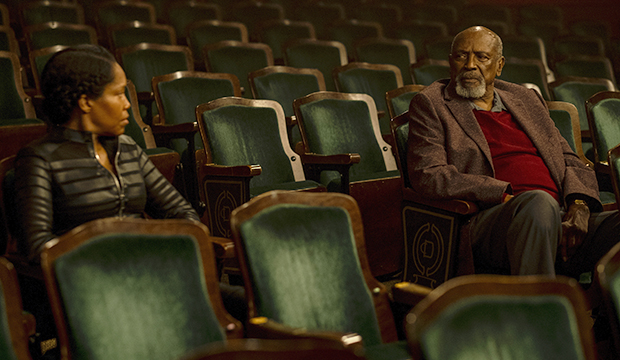 Last year, the limited/TV movie acting Emmys went to performers from four different shows: Michelle Williams (“Fosse/Verdon”), Jharrel Jerome (“When They See Us”), Patricia Arquette (“The Act”) and Ben Whishaw (“A Very English Scandal”). The spread was an aberration from the recent trend of one show bagging three acting statuettes, but that could very well resume this year with “Watchmen.”

Since 2000, six programs have scored at least three acting wins, with three occurring in the last five years:

“Angels in America” thus far is the first and only program to sweep all four main acting categories in any of the major genres (drama, comedy, limited/TV movie). But most of the other aforementioned ones did not have a chance to go 4 for 4: “John Adams,” “Temple Grandin,” “The People v. O.J. Simpson” and “Big Little Lies” did not field nominees in the fourth category that they did not win. Only “Olive Kitteridge” had a contender in its remaining category, supporting actress, but Zoe Kazan lost to Regina King (“American Crime”).

And King now headlines “Watchmen,” which became the second most-nominated limited series after the seminal 1977 miniseries “Roots” (37) with 26 bids, including in all four acting categories. Tackling very real and relevant issues — racism, police brutality, white supremacy — under a superhero mythology, the bold series is the runaway favorite to win Best Limited Series. “Angels in America,” “John Adams,” “Temple Grandin,” “Olive Kitteridge,” “The People v. O.J. Simpson” and “Big Little Lies” were all sweepers, each collecting at least seven Emmys, including the top prize (save for TV movie “Temple Grandin,” all were limited series). With “Watchmen” expected to similarly dominate, three acting wins is absolutely on the table.

However, at the moment, it’s only predicted to win two, including the most obvious one, lead actress for King. A three-time winner in four years, King was in a tight race in the nominations phase with fellow Oscar winner Cate Blanchett (“Mrs. America”), but has drastically distanced herself post-nominations at 82/25 odds to Blanchett’s 19/5 (“Mrs. America” earned 10 bids). Shira Haas (“Unorthodox”) is in third, with Kerry Washington (“Little Fires Everywhere”) in fourth and Octavia Spencer (“Self Made”) in fifth.

King’s co-star Jean Smart — whom she beat in 2016 for “American Crime” when Smart was predicted to prevail for “Fargo” — is in first place in our supporting actress odds. A three-time champ herself, Smart has overtaken pre-nominations favorite Toni Collette after “Unbelievable” under-performed, most notably missing for leads Merritt Wever and Kaitlyn Dever. Three “Mrs. America” stars, Uzo Aduba, Margo Martindale and Tracey Ullman, are next in line, while Holland Taylor (“Hollywood”) is in sixth. (Fun fact: Every nominee in this category has won an Emmy.)

“Watchmen” exploded in supporting actor with three bids for Yahya Abdul-Mateen II, Jovan Adepo and Louis Gossett Jr. despite missing for the heavily predicted Tim Blake Nelson. But it’s Jim Parsons (“Hollywood”) who occupies the top spot in our odds. Abdul-Mateen is in second, Gossett is in third, and Adepo is in fifth. Tituss Burgess (“Unbreakable Kimmy Schmidt: Kimmy vs. the Reverend”) is in fourth, while Dylan McDermott (“Hollywood”) is in sixth. The “Watchmen” trio’s biggest obstacle is vote-splitting, which can be overcome if there is a very clear favorite, like how Brown was “O.J.’s” undeniable breakout star and was able to defeat his more famous co-stars David Schwimmer and John Travolta. Abdul-Mateen has the most screen time of the three and is more integral to the story, but you can’t rule out an 84-year-old legend like Gossett who won his only Emmy for “Roots.”

Lead actor is the acting category “Watchmen” is least expected to win, as Jeremy Irons is in fourth place behind Mark Ruffalo (“I Know This Much Is True”), Hugh Jackman (“Bad Education”) and Paul Mescal (“Normal People”); Jeremy Pope (“Hollywood”) is in fifth. Irons’ low odds is not that surprising since he was borderline supporting on the show, but if there is a “Watchmen” wave, he could easily get swept up. He is one of two nominees whose project is up for the top program award — “Bad Education” is shortlisted for Best TV Movie, the film’s only other nomination. And let’s not forget that Irons has a pretty great Emmy record, having won three times from his previous four nominations, just like King, though his bids were spread out over four decades.

If “Watchmen” can score three or the elusive four acting wins, that’ll go a long way as it aims to topple 13-time champ “John Adams'” record of most wins by a program in a single year. 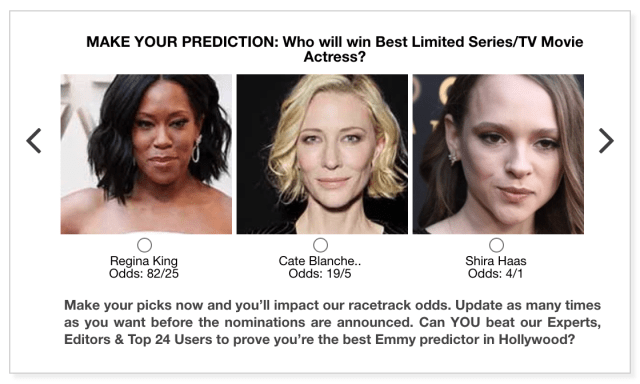