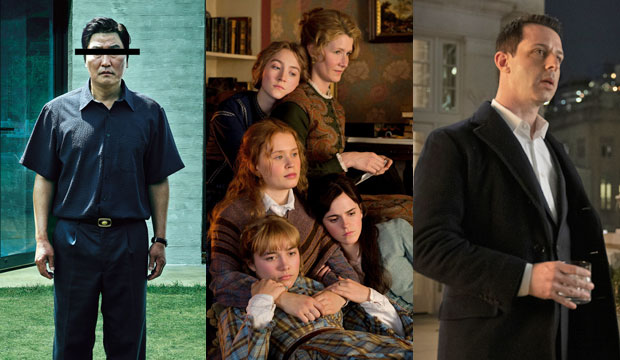 The 2020 WGA Awards will be handed out on Saturday, February 1, so which films and TV shows will be honored as the best writing achievements of the year? Scroll down for our complete predictions in 10 categories, listed in order of our racetrack odds. Our projected winners are highlighted in gold.

Our odds have been calculated by combining the predictions of more than 1,600 Gold Derby users who have placed their bets here in our predictions center thus far. That includes Expert journalists from major media outlets, the Editors who cover awards year-round for Gold Derby, and the everyday Users like you who make up our largest predictions bloc. One of our savvy Users usually outscores the rest of us when it comes to anticipating the winners.

We’re currently predicting Bong Joon Ho and Han Jin Won to win Best Original Screenplay for “Parasite” over Noah Baumbach for “Marriage Story,” but this award may or may not be a strong indicator of the Oscars since another top contender, Quentin Tarantino (“Once Upon a Time in Hollywood”) didn’t qualify for the WGA Awards due to the guild’s strict guidelines. Tarantino won for his script at the Golden Globes and Critics’ Choice Awards, and he’s also nominated at the BAFTAs.

Greta Gerwig is the front-runner for Best Adapted Screenplay for “Little Women,” where she faces tough competition from Taika Waititi (“Jojo Rabbit”) and Steven Zaillian (“The Irishman”). All three are up for BAFTAs and Oscars as well. “Jojo Rabbit” is actually the favorite to win for its script at the BAFTAs, while we think the American academy will follow in the WGA’s footsteps by picking Gerwig.

See who else is favored to win below across film and television categories, including “Succession,” “The Marvelous Mrs. Maisel,” “Last Week Tonight with John Oliver” and more.

Be sure to make your WGA predictions so that Hollywood studio executives and top name filmmakers can see how their movies are faring in our odds. Don’t be afraid to jump in now since you can keep changing your predictions until just before winners are announced on February 1. And join in the fierce debate over the 2020 WGA Awards taking place right now with Hollywood insiders in our film forums. Read more Gold Derby entertainment news.