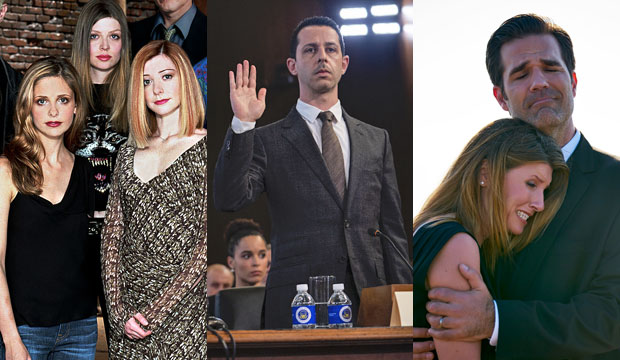 Goodness only knows how many industries will end up shut down indefinitely due to the coronavirus, or for how long, but our readers are doing their best to stay sane by catching up on new TV or revisiting old favorites. Scroll down to read some of their comments below in case you need ideas for how to pass any extra time you may have on your hands if the pandemic has you on lockdown. And join the discussion to let us know what shows are keeping your spirits up.

My comfort food of choice is usually nostalgia, which often means old episodes of “Buffy the Vampire Slayer,” “The X-Files,” “Star Trek: The Next Generation,” “MythBusters” or “What Not to Wear” — or all of the above. Watching back episodes of “How the Universe Works” on the Science Channel is also good in a pinch; nothing puts your concerns in perspective like trying to wrap your head around supermassive black holes and dark matter.

I’m not the only one indulging in re-watching. Some of our readers told us they’ll be dipping back into “The Americans” and “Big Little Lies.” Others are sampling past shows they’ve never seen before, like “The Leftovers” and “Battlestar Galactica” — both pretty dark choices, but sometimes a crisis calls for a safe, cathartic place to process heavy emotions. One reader is jumping into Amazon’s comedy “Catastrophe,” whose title couldn’t be more fitting to our current moment.

Still others are hoping to catch up on current shows like “The Morning Show,” “Succession,” “Watchmen” and “The Marvelous Mrs. Maisel,” plus others that are airing new episodes this spring including “Westworld,” “Little Fires Everywhere,” “This is Us” and “How to Get Away with Murder.” It just goes to show that there are no shortage of options regardless of whether you’re bored, scared, angry or optimistic. See what some of our readers have to say below.

DylanMcPhee: “I’m watching ‘Catastrophe’ for the first time, Sharon Horgan and Rob Delaney are hysterical in it and I’m really enjoying it. I’m also re-watching ‘Homecoming’ because I can’t understand how Julia Roberts didn’t get nominated at the Emmys for that show. I had her WINNING. It’s such a quick paced, Hitchockian piece of television.”

wolfali: “I recently started a free trial with AppleTV and started ‘The Morning Show.’ Next I will re-binge ‘The Americans,’ then I’ll re-binge ‘Big Little Lies’ before ‘Hollywood’ and ‘The Eddy’ are released on Netflix.”

Heptapod: “Finally going to get around to finishing ‘The Handmaid’s Tale’ season 3. Will also likely be fully jumping on the ‘Succession’ train (never got past episode four). Might try out ‘The Americans’ or ‘The Leftovers.’ Will also probably be keeping up with more weekly-releasing premieres over the next few months just because I’ll have more time for more shows.”

Reis: “I am watching ‘Buffy’ for the first time (finishing season one). But I am thinking about watching ‘Battlestar Gallactica’ first.”

Gabarnes43: “I’m isolating for two weeks so need some good things to watch. I’m thinking maybe ‘Ozark’ as it’s on Netflix (in UK so don’t have HBO or anything). I’m also waiting for ‘Hollywood’ to come out on Netflix. I started ‘Stranger Things’ last year but never got to finishing it so I’ll probably give that the ok. I also wanna watch ‘Killing Eve’ again before the new season comes out.”

Luca: “Well, between the 100 of YouTube videos I’m watching about the coronavirus (which is maybe not the best way to stay sane), I have been watching ‘Succession’ S1. I will start S2 very soon, then will watch ‘Watchmen’ S1 and ‘Maisel’ S2-3. Of course, I also have my weekly shows (‘Westworld,’ ‘This Is Us,’ ‘Little Fires Everywhere’ and hopefully ‘The Plot Against America’). ‘HTGAWM’ returns in two weeks, yay! But sometimes I just need my occasional episode of ‘Glee,’ too.”

Incarille: “Well here in France the biggest cable network offered to all his subscribers all the channels. So I think I gonna start watching ‘Barry’ and ‘Succession.’ And I’ll maybe catch up with ‘The Golden Girls.'”

MAKE YOUR PREDICTION: What will win Best Comedy Series?
To save your prediction, you must log in to Gold Derby. Click here to sign in with existing account -- or create a new one.
PREDICTthe 2020 Emmy nominees now; change through July 14

'Buffy the Vampire Slayer': Top 20 Best Episodes of All Time