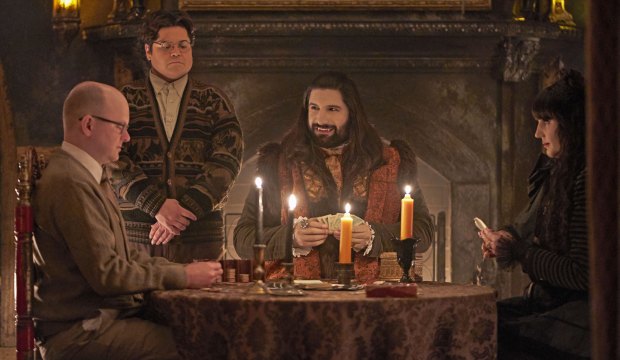 One of the biggest surprises at the 2020 Primetime Emmy nominations was “What We Do in the Shadows,” the FX comedy series about vampires in Staten Island. It earned eight bids including Best Comedy Series. Three of its other nominations are for Best Comedy Writing, and it’s a rare feat to score that many bids in the category. Does that make it a bigger threat to win the top award than we’re giving it credit for? A look back at the history of the writing category suggests … maybe.

SEESam Johnson and Chris Marcil Interview: ‘What We Do in the Shadows’

There were 13 times before in Emmy history when a comedy received three or more writing bids in a single year. About half of those shows won Best Comedy that year, while the other half didn’t. But for a while it was a perfect record. The first six times a show accomplished that writing feat, it went on to take top honors: “All in the Family” in 1972, “The Mary Tyler Moore Show” in 1977, “All in the Family” again in 1978, “Taxi” in 1981 and “Cheers” in both 1983 and 1984.

SEEPaul Simms Interview: ‘What We Do In The Shadows’ producer

The last comedy with that much love from the writers branch was “30 Rock” in 2009, and it won Best Comedy that year for its third and last time. So “What We Do in the Shadows” is the first to pull off this feat in 11 years. It’s nominated for the episodes “Collaboration” (by Sam Johnson and Chris Marcil), “Ghosts” (by Paul Simms) and “On the Run” (by Stefani Robinson). It’s the most nominated show in the category against two episodes of “Schitt’s Creek” and one apiece of “The Good Place” and “The Great.”

But here’s the thing. While shows with three or more writing bids have only won Best Comedy Series that year about half the time, almost all of them won Best Comedy at some point during their runs. “The Wonder Years” and “Arrested Development” won the year right before their writing sweeps, while “Seinfeld” won the year immediately after. The only one of the aforementioned shows that never won Best Comedy was “The Larry Sanders Show,” which suggests that even if “What We Do in the Shadows” doesn’t win Best Comedy this year, it’s one to watch in the years to come.